When vacationing far from home in a 14 year-old car, it generally pays to have a contingency plan if things go sideways. Doubly so if the trip in question is to the utterly cell-serviceless, achingly beautiful, and impossibly twisty roads in and around Deals Gap, home of the Tail of the Dragon.

I have known about and wanted to visit this road for many years, as well as the surrounding national park area. My husband had been to the Smokies a few times before and wanted to go back to show me around, and Pride at the Dragon III (P@TD) was scheduled to take place just when the spring foliage would be returning. Didn’t take any convincing at all; tickets purchased.

Now, I knew my Miata was no spring chicken. I bought the car at 92,000 miles figuring it would need new fluids, seals, and a replacement clutch. While we were in there doing the clutch job, it also got new throwout and pilot bearings, a stainless clutch cable, and a lightweight flywheel (some ragrets). It also got Yonaka coilovers, new motor mounts, and some beefy Flyin’ Miata swaybars. Not all of these parts were replaced at once, but the point is that they were in fact replaced. In combination with new Goodyear A/S tires, the new setup proved to be a ton of fun on the street at pretty much any speed, retaining its progressive breakaway behavior and willingness to rotate without getting too squirrelly.

But following the clutch and flywheel job, I started hearing an ever-persistent chirping noise on idle that got worse following hard driving. The NC Miata’s six-speed is known for its notchiness, which can be ameliorated with some Motorcraft transmission fluid. I had done about 1,200 miles of driving with the “unicorn tears” when shifting started to go from regular notchy to Appalachian-Trail-thru-hiker-crunchy. Some folks on Facebook who track their NC Miatas said to adjust the clutch pedal and try Honda manual transmission fluid. I did so and the shifting behavior returned to normal, though the cricket staccato on idle never went away.

I had two shops take a look and give me some opinions on the viability of driving this car under its own power 500 miles to the Dragon, flogging it a few times in the mountains, then driving it back home. The verdict from both mechanics was a failing idler shaft bearing, which resides inside the transmission and requires a rebuild to fix. The good news? “They fail slowly over time. You could have as many as 15-20,000 miles before you truly need a rebuild. Go on your trip and have fun.”

That was good enough for me once, but never again.

When getting the tires replaced a few weeks ago, the mounting process removed some of the black paint I had applied to the wheels. No worries, I thought. I’ll just install my 18-inch summer wheels and tires from my Mazda3 so I can still drive the Miata while I repaint the OEM wheels.

Well, I nicked a thread on one of the rear passenger hub bolts, and proceeded to make it much worse by trying to file it out.

I called my local Mazda dealership and it’d be $11 for a replacement. Not bad. On the surface it seemed like it would be a straightforward job.

This was two days before the trip.

So it turns out the brake rotor shield and hub assembly around the lugs are too tight to be able to hammer out and replace the stud. Full hub disassembly required. You can probably guess I had never done this before. I was also missing a required 19 mm box wrench, gear puller (to extract the hub from the bearing), and an impact gun.

I called my neighbor, an Air Force Reserve jet turbine mechanic, to see if he thought I could get this done with enough time to still work the next day and pack for the trip. Instead of answering no to what would end up being a six hour job, he put his toddler to bed, came down with the tools I was missing, and we proceeded to tear down the rear passenger multilink. Five disassembled tie rods, a wasted alignment, many beers and expletives later, and a husband wondering how the hell we were going to make it to Tennessee, he suggested taking the Mazda3. You can imagine how that went (it didn’t). I didn’t even have beer to offer to my neighbor! What an absolute hero. I have since bought him plenty of beer.

Anyway, the suspension ended up being fine. New hub bolt was in, my fears of the rear passenger wheel yeeting itself off mid-Dragon assuaged.

The trip down was honestly not bad. I was expecting to be arthritic by three hours in, but the car acquitted itself well on I-81 with the new tires, and I never lost feeling in my clutch leg.

Once we got to Fontana, my typical awkwardness when meeting new people was a non-issue. You won’t find me talking about ball sports to anyone, anywhere, but cars turn me into a different person. Everyone was friendly, interested in my useless automotive factoids, and generally made me feel significantly more extroverted than I actually am. Good start.

Next day, we all congregate for a 70 mile drive of the Cherohala Skyway… in the rain.

“We’ll be going in groups based on the pace you want to take,” I hear from Tatiana, the founder of P@TD.

Okay, well, there are fast cars here, but I’m in a Miata and the roads are twisty. I didn’t come here for a sleepy Sunday cruise. I ended up going with the third group out, one of the quicker ones. It wasn’t till we departed that I realized not only was my new radio not transmitting signal, but myself and and two ND Miatas ahead of me were sandwiched between two 3.0 A90 Supras.

So, what I had anticipated would be about 6.5 to 7/10ths (rain, remember) ended up being a merciless 70 miles of mechanical beating. Now, don’t get me wrong. Even in the poor visibility, dodging gravel and tree branches on the road, it was one of the best drives of my life. I was in a Miata, after all – perfectly weighty and chattery steering, progressive breakaway, telepathic brakes and throttle, and utterly unflappable confidence through the tightly coiled esses. Sitting 1.5 inches lower than stock with fat sway bars, my husband didn’t feel a whiff of the motion sickness that passengers on the Dragon are warned about.

Descending into Tellico Plains for a group lunch, we decided to split off from the group to go visit Great Smoky Mountains National Park.

At that point the car was clearly unhappy. The crunchy shifting that I had hoped was resolved came back. My gut told me we shouldn’t push the car hard anymore during the trip; it did have to get us home after all. But we made the decision to go into the park and hope for the best.

We returned to the visitor center after an absolutely breathtaking hike up to the “chimney tops” that were torched by a wildfire a few years back, and I literally could not get reverse to engage. First and second were putting up a fight too. It wasn’t just crunchy. No amount of effort could get first to slot in, even with my foot smashed so far into the clutch I may have dented the floor pan. Uh oh…better start heading back to the group.

The next morning, Keenan – mechanic, rally racer, and friend of P@TD – helped me out. I stood in my pajamas in the middle of the street cursing at the spotty Wi-Fi, trying to download the NC Miata shop manual to get some specifications for him. He hadn’t even had his coffee yet as I came back to tell him I couldn’t get the manual to download, him already underneath my car in what was, I swear, the only flat part of all of Fontana Village.

He adjusted the clutch pedal further (almost maxed out) and it started behaving normally again, just like that. We talked about his current racing escapades, my aspirations to work on cars, and the incredible group of people that were assembled at Fontana. We parted ways with him warning me against any hard driving, particularly on the Dragon, but that I would likely make it home, maybe with some luck.

Ok, but I came here to do the Dragon.

It turns out Highway 129 is the most direct way to Pigeon Forge as well, the National Park town where my husband and I wanted to go to gather some gifts for family and grab a bite to eat at Huck Finn’s Catfish. I was feeling hesitant to drive the car anywhere where we couldn’t be rescued, but considering the almost absolute lack of cell service out there, it seemed like the rest of the trip was hinging on luck anyway.

So I babied the car over the Dragon because 1) I’m dumb and 2) because I had to at least say I did it.

It got us to Pigeon Forge, I got my pictures, and even at what was probably a 4/10s effort, I had a blast.

Fast forward to Huck Finn’s, and Reverse, 1, 2, and 3 have completely left the chat. New symptoms – a scraping feeling on clutch engagement and now flaccid pedal – tells me the master cylinder is gone, and perhaps the teeth in the pressure plate have warped from hard use two days earlier. Either way, we were two hours from Fontana, ten hours from home, and in majorly in need of some luck. At least there was cell service.

AAA wanted nothing to do with my problems, though after a bit of convincing I did manage to get GEICO to cover the 48 mile tow to Knoxville, where my uncle lives. He came to save us from the empty parking lot I was fortunate enough to break down in, fed us a lovely charcuterie, and offered to board us and the broken Miata until we figured out what to do.

But it turns out there are some incredibly generous people on the P@TD roster. The night before at the group dinner, a new friend who had heard of our misfortunes offered up space on his car hauler to bring us back. I (mistakenly) told him we were expecting to be okay for the drive back, but that it may be good to caravan back just in case.

Well, it turns out that not only did we need that tow back, but he sacrificed his Saturday evening festivities to come pick us up and bring us back to Fontana because we left half of our belongings in our cabin and had no way to return the key otherwise.

So instead of driving the Miata back on Sunday, I watched it on an open trailer through the windshield of a violently yellow Scion FR-S-turned-BRZ show car. 6:00am Sunday to 12:30am Monday was checkout, loading up the Miata at my uncle’s, driving and pit stops back to Maryland. I am still positively stunned by the generosity and trust that he placed in me by doing this, and I will not soon if ever forget it. His Gladiator EcoDiesel no doubt saved me several hundred dollars (if not more) versus a U-Haul rental.

All of this is to say: either bring your own car trailer, bring a new car, or you’re at the mercy of those around you. Fortunately, there seems to be no shortage of amazing people at Pride at the Dragon.

I can’t wait until next year! Anyone want to go to Miatas at the Gap in the meantime? 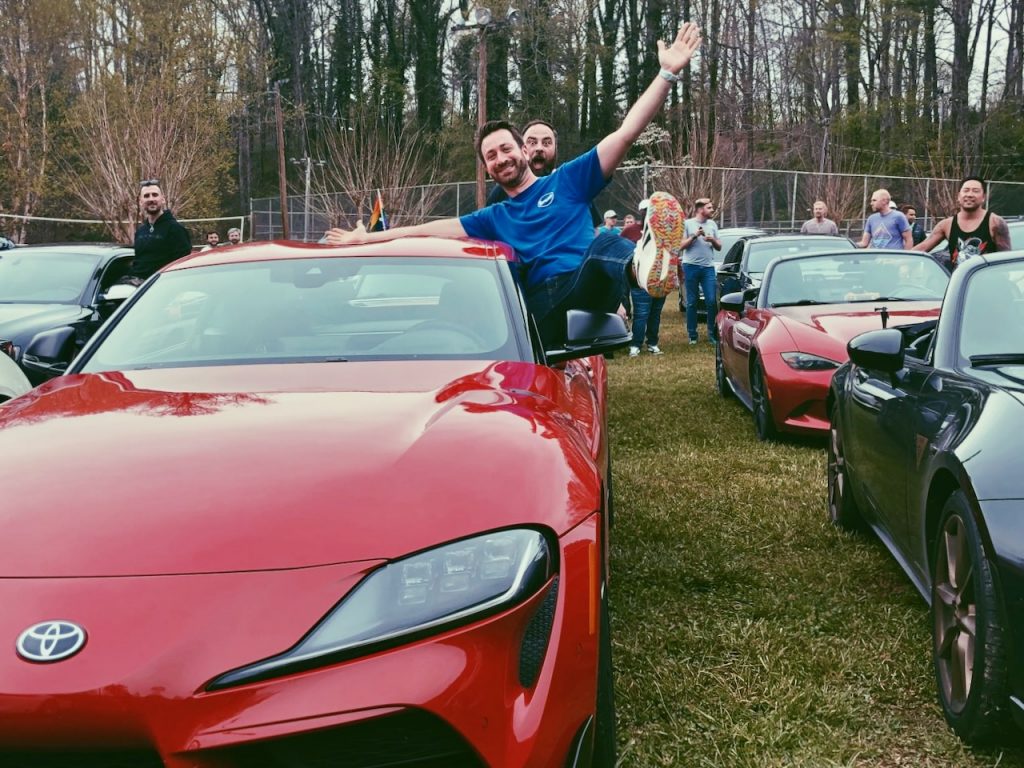 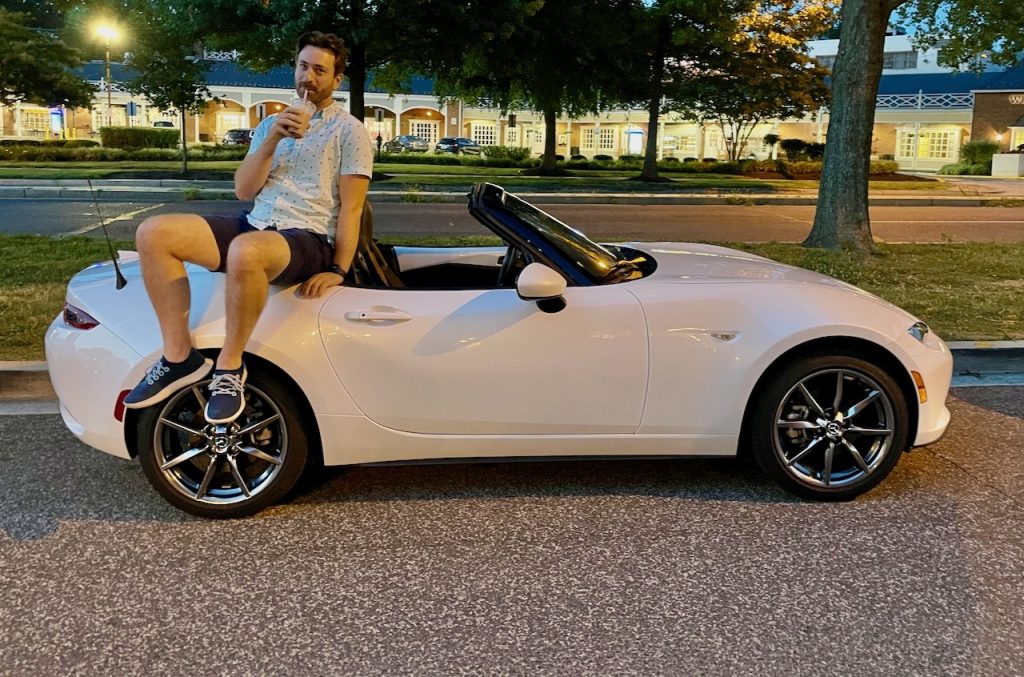 1 thought on “My First Pride at the Dragon: New Friendships, Great Roads, and a Whole Lot of Luck”