Over the off-season I admittedly did nothing to my E36. It was the first winter in quite some time that the car didn’t actually need any work to participate in the spring events. And given New Jersey had such a mild winter this year, It was driven to school and work quite often. The one thing I did was store my Bridgestone RE71Rs in the basement in attempts to preserve the compound of the tire. As I found out at South Jersey SCCA’s opening autocross event, it didn’t quite work.

Our events are held at an abandoned airport right on the Bays of Atlantic City. There is constantly a sea breeze, so most early-spring events struggle to reach the 50s. With temperatures this cold the tires never get a chance to warm up, putting the awd cars at a huge advantage. My two competitors for the day were Subaru WRX’s, and they had done something to their cars since the last time we ran together. We spent the entire day swapping the lead in STX always staying within a tenth or two of each other’s time. My friend Ken Roller (yes that’s his real name) was trailing my leading time by .5 seconds with one run left for him in the afternoon. As I was packing my car at the end of the day the last few cars were making their final runs. The rumble of Ken’s WRX crossing the finish line  was accompanied by him shrieking in delight as he had just destroyed my time by 1.8 seconds. We shook hands and my excuse was bad tires.

By the second event, nothing had changed with the car and its tires. I was still trying to hunt down the few remaining sets of RE71Rs in the country. They were backordered until August, and I didn’t have that long to wait. So I was back at it on some toasted rubber. Event #2 was much of the same story with our times being very close to each other, but this time I knew what to expect regarding the levels of grip. I was able to adjust my driving style enough to edge out Ken in his Subaru by 1.3 seconds. I felt comfortable with that lead going into the last run of the day until he beat again by almost a second. I had to find those tires.

From a competitive standpoint it is great to have somebody else in my class push me to squeeze every last second out of my runs. It forces me to focus a bit more on my lines, thus improving me as a driver.

These first two events also taught me the new skill of driving on old tires. Anybody who has driven on old clapped out tires can attest to how much they change the dynamic of a car. Driving fast on old tires is seriously hard, and it was actually a challenge I enjoyed quite a lot. Luckily I remembered the GoPro for the second event, so we have some sideways stuff to watch back and enjoy. 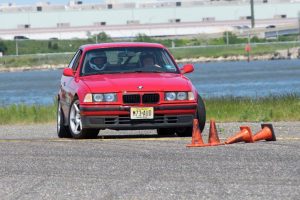 The next event will be the first on my new tires and alignment, so we can see just how big of a difference a fresh set of rubber makes.