When you’re a little kid it’s easy to lay claim to things as yours without really owning them. Calling dibs and whatnot. Saying that you have something when in reality it’s just your parents’, brother’s, or friend’s. We’ve all done it. It’s a sense of ownership that we feel, but that sense is also that of responsibility. Often, we may feel the need to clean this certain thing every time we see it, out of a respect for what it is. Perhaps we feel the need to claim it because it means more to us than it does to the one who actually owns it, even declaring, “when you are ready to sell it, you call me first.”

Though sometimes when there’s a bigger picture involved these things just slip through the cracks and one day you wake up to find what you thought was yours… really never was.

I was sixteen years old, riding shotgun in my brother’s cherry red 1970 Chevrolet El Camino. It was a painfully hot and humid Georgia summer afternoon, typical. Windows rolled down and the vent windows pointed just perfectly at my face to push the beads of sweat from my forehead back. I can still remember the rhythmic rumble of the worn-out V8 under the hood. If I’m not mistaken, we were listening to “Born to Be Wild” on the then “new” 97.1 The River. It was, if nothing else, a perfect day to go cruising.

Always a vigilant car hunter, I had spotted the taillamp to what looked to be a late 1950’s Imperial at the top of a hill, high along-side the road. Its body completely overgrown in kudzu but its bombsight tail fin just poking out from underneath like a hand in quicksand, its last cry for help.  Like any rational human, I had forgotten how to communicate properly and started screaming at my brother to turn around. We’ve got to go see this fantastic finned car from the fabulous Fifties! For fear of his own life or simply humored he turned around and pointed the El Camino up the steep driveway and through the tree line.

Still to this day, I can remember hearing the Jurassic Park theme song playing in my head as we crested that hill. Derelict cars were everywhere. AMC Marlins, suicide-door Lincoln Continentals, Kaisers, and more. It was an assortment of the goofiest, most wonderful classic cars just laying about with little rhyme or reason. I had died and gone to heaven.

The property was flat on top but was outlined squarely by two roads. On our side, we had the black 1959 Imperial Hardtop, the other side nearest the road had an open-top mid-thirties American-LaFrance fire engine. Between the two roads laid a small ranch styled house with an immaculate 1963 Lincoln Continental in its car port, half covered with a bedsheet. It was ink black with a white convertible roof, red leather interior, and four cats sleeping on the hood. To the left was a massive cement brick building with a flat metal roof. I could see more classic cars surrounding it and further down the property.

Knocking on the door to the home, I was greeted suspiciously by a gentleman in his 80s, clearly confused why a pudgy short kid was knocking on his door. Before he could say a word, I word-vomited exactly everything my mind was thinking. “Hi, I’m Casey and I want to buy all of your cars.” He must have seen the humor in it all and very politely said, “no, but you can look around as much as you’d like so long as you don’t break anything.”

Mr. Puckett was his name, kind of frail and quiet, but endlessly entertained by my enthusiasm for his collection of what most anyone in their right mind would consider junk. I truly could go on and tell you about all of the wonderful automobiles he had tucked away, particularly his most prized cars kept in that cement block building. But you came here to read about an Edsel and I’ve strung you along long enough.

Sitting deep in the woods was a car unlike any I’d ever seen before. Sure, I knew what an Edsel was. I had read all about them in my many books growing up, but this one was different. It had wood side paneling and boomerangs for taillamps. The styling was so bizarre and interesting I couldn’t seem to forget about it. So, for the next five years, I would come over to see Mr. Puckett and his car collection, always making a point to go visit the forgotten Edsel out back and wiping the pine needles from its body – sometimes chasing a mouse or a critter out from the engine bay too.

Eventually Mr. Puckett’s mental health started to decline and unfortunately, he forgot entirely who I was. I would still visit him on rare occasion, he then had moved in with his sister across the street until one day he himself was gone and so were his cars. Sometimes in life we can have our cake, but never get to eat it.

Years later, I’m driving down the back roads of North Georgia when I stumble across an open field, a wooden fence spanning the from end to end, and a seemingly endless row of derelict classic cars lining the other side. Fantastic Cadillacs, and Buicks, and Studebakers…and my Edsel. Sitting just on the other side of the fence, looking at me as if it were my dog that ran away and came back, acting as if nothing had happened. I pulled over off the road and quickly ran to the fence. It hadn’t aged well but it was all still there.

Over the next few years, I became friends with the new owner, Mr. Simpson, a collector of old cars with no intentions on selling. Anytime I’d ask about the Edsel he would cut our conversation short and find something better to do. He however gave me the same rules as I’d heard all those years before. “You’re welcome to come and look at them as often as you like, just don’t break anything.”

The Simpson Car Farm eventually became a tourist destination, renown for its massive collection of rusting cars treated as an outdoor museum. I’d take my friends regularly and walk them around teaching them of the different unique cars and features that are now obscured in the annuals of history, always making a point to stop and talk about this dilapidated Edsel Bermuda wagon, taking time to point out its unique boomerang taillights and now faded woody-esque paneling.

In December 2021, Mr. Simpson passed away and his entire estate went up for auction. The auction itself was to be for two days, with the entire week prior set aside for viewing. I practically sat on that Edsel for five days telling people to go away, like a tiny, angry chihuahua protecting its bone. I distinctly remember one genuinely interested bidder coming up to look at the car and me telling him that it was filled with snakes. It seemed to work, because after sitting in the hot Georgia sun for two days during the auction, I was the highest bidder.

I remember telling my friend Greg (who was at the auction as well buying his own wrecks & sins) that I’m irritated that I should have to buy my own car. It’s been my car since I was sixteen years old, it just keeps getting taken away from me. I felt like I had just paid for its parking ticket for the last decade and a half. All the same, the sense of relief that washed over me as its auction closed was euphoric. With a deep breath of air, I could finally say that it was my car.

So, truth be told, the car is realistically too far gone to be saved. Its mighty 303 horsepower ‘E400’ 361 cubic-inch V8 is locked up tighter than Dick’s hat band. The rare Speed Racer-like Teletouch pushbutton automatic transmission is sitting in the back cargo area behind the seats… in pieces.

If you were to sit in either the front or rear bench seats you’d fall straight through the car and onto the ground below. The Edsel’s body panels are paper-thin from rust or simply non-existent. And… I don’t really care, if I’m at all honest. Simply having it is enough. If the car is never more than anything it is right this very moment, then its still more than what I had ever hoped for, because that 16-year-old Casey is crying his heart out in joy to finally be reunited with what was one of the most inspirational moments of my life.

I caught my white whale. You can come look at it as often as you’d like, just don’t break anything. 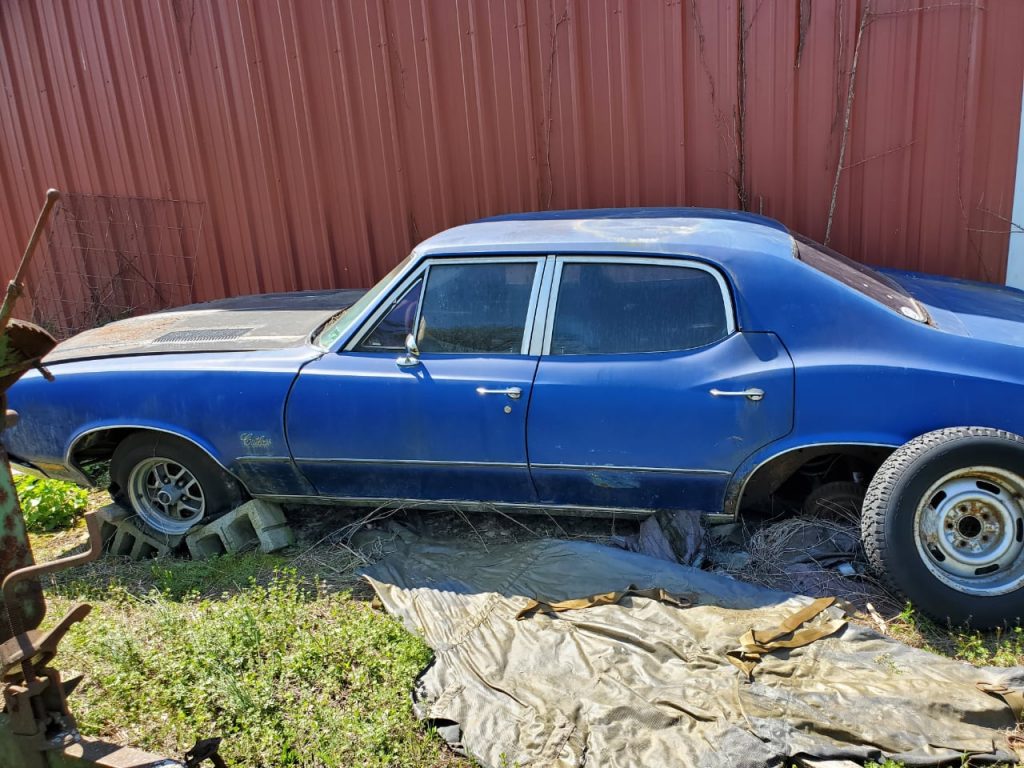 Casey enjoys driving slow cars fast, regularly racing his ex-Spec 1992 Miata on the weekends. He enjoys the quirks of vintage cars so much that he now restores them as a profession. Never one to turn down a chance to learn something new, Casey is often seen working on friends cars after work.

7 thoughts on “Chasing My White Whale: Buying My 1958 Edsel Bermuda After 15 Years”