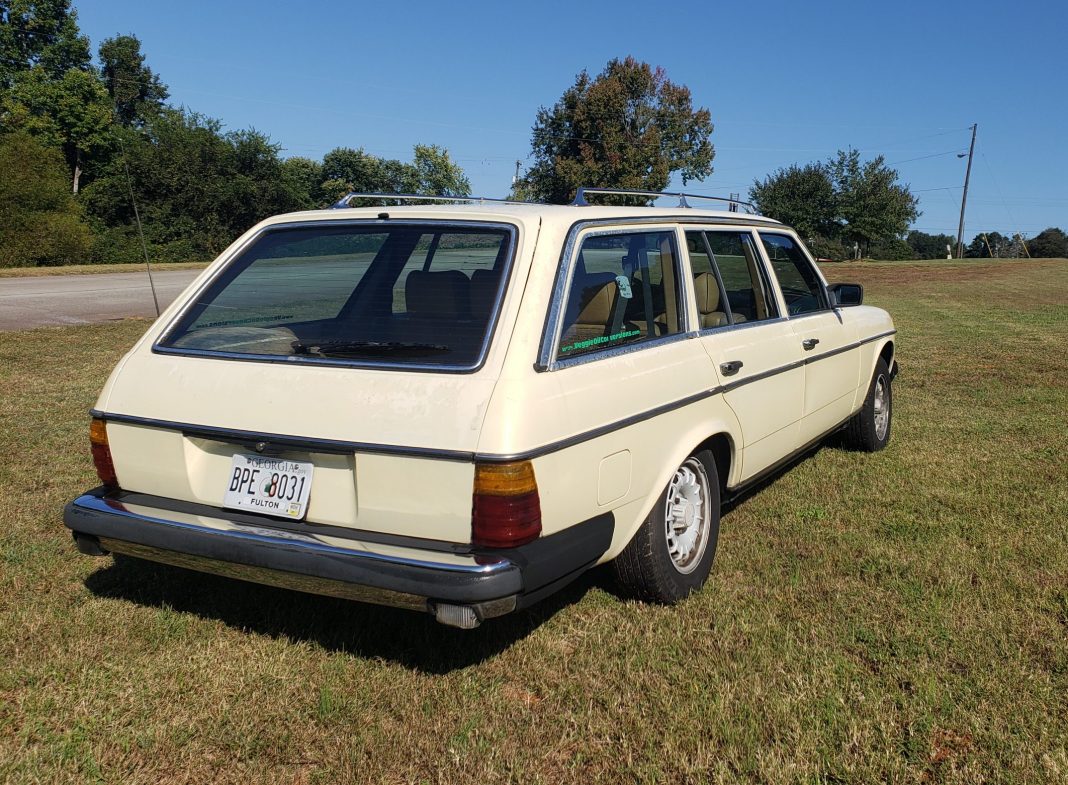 Throughout the production of the “W123” Mercedes-Benz 300-series, there was hardly a shortage of wagons available for sale from other marques. Yet, Mercedes-Benz knew they had hit a thirsty niche fairly early on. The North American wagon market was plush with offerings from nearly every manufacturer with the exception of two – Cadillac and Lincoln. While you could order a Buick Regal wagon with a diesel engine and plenty of luxury to far out-punch the Mercedes on a spreadsheet, it still didn’t have the build quality of the W123 Estate. Same story with Mercury, you could pick up a comparable wagon… but it still wasn’t a Mercedes-Benz. M-B was inherent luxury, everything else was added-on luxury.

The Mercedes-Benz 300TD Estate was an interesting purchase to make in the 1980s, though. While it was obviously a capable luxury auto marque, Mercedes-Benz still offered a motor for any tax bracket. This 1983 300TD was at the top of the heap with its inline 5-cylinder turbocharged diesel, producing endless torque and reliability unlike anything before. You wouldn’t sit in one today and mistake it for a modern car performance-wise, but it’s not a punk either. The turbo pulls firmly in its low torque band, always giving the sensation of rapid acceleration, even if a mother pushing a stroller is passing you.

Old Mercedes-Benz didn’t fail with it’s interior design, either. To their credit, even today the W123 feels as lovely as an Ikea condo. The MB-Tex vinyl covering the orthopedic-designed seating is seemingly indestructible. The attractive molded dashboard offers curves from a time when everything was designed with a straight edge. If I had to critique anything interior-wise it would be Mercedes’ near-senseless use of wood veneer. After almost 40 years, our test car is suffering harshly from a diseased look, the wood splitting and distorting uncomfortably before me.

Sitting behind the wheel of the old roller gives a wonderful sense of presence. A car this size is large enough to be observed and rarely ignored by distracted motorists. However, if the impressive length and girth is unnoticed and you are whacked by a newer rival, rest assured you’ve got a fighting chance at winning the impact battle. Mercedes-Benz incorporated early safety features throughout the wagon. A driver’s airbag was optional, and European-market W123s also offered one for the front passenger. The “town and country” horn has an adjustable decibel level to truly merit awareness, and the thick doors are not just for show.

I’ve always been a proponent of driving proven “antique” vehicles as daily runners, rather than spending a fortune on a modern car with perhaps-questionable reliability. The Mercedes-Benz W123 chassis would be a lovely car to daily. This example in particular would be outstanding due to its durability and basic amenities. It’s equipped with power windows in each door and has enough pulling power to drag the Rock of Gibraltar, however slowly, across two countries. Fear not, you easily-perspired fool, this car comes with a near-incomprehensible automatic climate control, the buttons resembling ancient Egyptian hieroglyphics. These cars also came standard with power steering and power brakes. What else do you need?

This particular car holds a party trick that should make any environmentalist’s knees weak with joy. This Magic School Bus runs off of used french fry oil. Powered entirely off Arby’s curly fries’ greasy byproduct, the two-ton turbocharged behemoth is less harmful to the environment than the manufacturing alone of your Prius and Leaf… you yuppie. This wagon, with its 303,000 miles, is technically actively recycling and is environmentally friendly solely by its existence and continued use. You can practically hear the ozone thank you as you drive your sooty spooly wagon to your next camping destination.

To be fair, it’s not all sunshine and rainbows with a 40-year-old luxury vehicle such as this. It’s a diesel to begin with, so this cold start shakes and sounds like a shivering skeleton – drastically enough that neighbors I’ve never spoken to before have stopped and asked if my car was alright. It was, she was just cold. The second issue is the unique electrical system. Despite the ever-second-guessing gas gauge the electrics are very reliable. However, it’s still a mystery to me as to why you have the option of turning on just your left-hand lights… or just right-hand lights. Explaining my mistake to the police officer led to a hilarious moment I’ll never forget. And third, quality is sometime a curse. Its high-quality drivers’ door must be slammed with such force to close properly I fear shattering the sound barrier. While I’m sure it’s a misaligned door striker or a worn-out hinge, that’s not my problem.

If by some miracle I’ve convinced you to blow the dust off some old runner and abandon your crossover or other soulless modern toaster in favor for something that shows its arthritis with pride, then may I please encourage you to consider a Mercedes-Benz W123? The 300 Turbo Diesel is an exceptional model that putters along with modern traffic seamlessly. Offering comfort and safety of a car decades newer, it always feels sure-footed. Aside from the missing, now standard touch screen, push to start ignition, and start stop technology, it’s not far off from what we demand today. W123s have enough cargo space for your family, (slow) towing ability, and a personality.

For not a lot of money you could buy a companion that will – if treated right – far outlive the human species. Very famous for having several examples clearing the 1,000,000-mile mark, these cars just keep going. The W123 chassis is still being used as a taxi to this date, despite the newest one having rolled off the assembly line 34 years ago. It was so popular and regarded as a quality luxury vehicle, this very platform became the influence for not only German, but Japanese and American sedans. If it was good enough for us then, is it still good enough now?