Some cars require more maintenance than others. Some would call BMWs “High Maintenance” cars. I’d say they’re right! But any car that is 33 years old didn’t make it this long as a result of neglect. Our 1987 325e is still clattering away with an unknown amount of miles, most likely well into the 200,000 range. It was clearly maintained to live this long, but we have no records of anything actually being done. So before we take this car on road trips, to an autocross, or for a weekend at the track, we need to make sure it is running the best it possibly can.

First and foremost on the list for any six-cylinder E30 without service history is the timing belt. Like many other cars of the time, the M20 inline-six has a timing belt instead of a chain. The service interval for these is short, every four years or 50,000 miles. We had no idea when the last time the belt has been serviced on the 325e, so that was the first project to tackle!

A quick search on FCP Euro turned up a complete timing belt service kit. FCP Euro is great for kits like this, and all of their products have a lifetime warranty, so we’ll never have to pay for another timing belt kit again. The only thing this kit was missing was the seal behind the cam sprocket that often leaks oil. While you’re in there, make sure to replace that part as well.

By diving straight into this timing belt job, it gave us a chance to assess how the previous owner maintained the car. The verdict? Just enough to keep it running well. The old timing belt looked okay, but we found some broken things from the last time it was done. The biggest concern was that the distributor was only being held on by one bolt. The other two had broken off inside the aluminum timing cover. We tried to get these out to no avail.

We wanted to make sure the ignition system was set up perfectly. So instead of trying to salvage the old parts, we ordered a new timing cover and distributor cap. We also found the timing belt tensioner spring went missing sometime between the last timing belt service and now. The spring is responsible for setting the initial belt tension. To overcome that we made sure to put adequate tension on the belt before tightening down the tensioner itself.

BMWs are notorious for cooling system failure when they get to higher mileage or up in years. So, it’s also a smart idea to replace the water pump, thermostat, and radiator at this time. Luckily, the water pump and thermostat were included in the timing belt kit and we only had to buy the 325e’s radiator separately. The plastic end tanks on the radiator dry out over time and start to leak. The safest replacement interval to assume is “every 10 years or 100,000 miles” with all of these parts. With everything installed, we bled the cooling system and it was on to the next project!….. or so we thought. The next day, we took the E30 out for lunch and it started to overheat on the way. We pulled over to let it cool down and chose to eat lunch within walking distance of where we were temporarily stuck.

Further investigation revealed the new thermostat was not opening when it should, not allowing the car to cool once it hits operating temperature. For the time being, we swapped back in the original thermostat (date stamped 2010), and the car now holds a steady temperature.

After the cooling system work, we replaced all of the fluids, filters, plugs, wires and pumps. While it wasn’t necessary to do the fuel pumps, we were experiencing some issues that could have been related to one starting to go bad. While we were already doing the work we decided to replace both the internal and external pump. Refreshing the entire fuel and ignition system ensures the car is running optimally and reliably and allows hard driving with little concern.

The previously-mentioned issues are rough idle on cold starts and intermittent no-spark stalling. We tracked this down to the crankshaft positioning sensors. On the E30 325e, there are two, both located above the transmission bell-housing. The exact purpose of each sensor isn’t totally clear, but it seems one is used for start-ups and the other is used while running. After some troubleshooting, we found the car responded favorably to only genuine BMW crank sensors. The issue was too intermittent to tell you if we’re completely in the clear, but the car definitely feels better than before the repair.

All of the maintenance items we bought for this car came to roughly a quarter of what we paid for the entire car itself, but we knew this would be the case going in. Theoretically, we took a 30-year old BMW that we had zero trust in, and ensured we can drive it anywhere. That’s not to say there won’t be a random old part that fails at some point. However, the chances of that failure being catastrophic have been greatly reduced for many more miles of motoring! 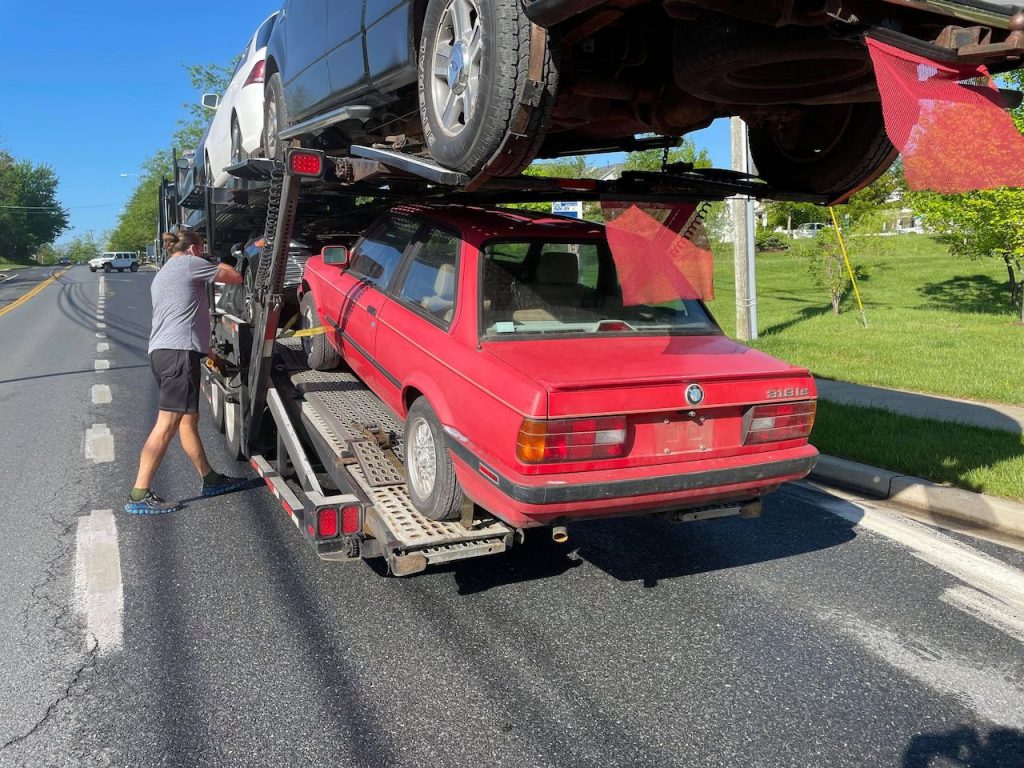