My driving progressed over the last year or so to the point where I (and others) felt that I was ready for wheel to wheel competition. I decided back in November that 2017 was the year I’d finish the car and do Comp School, and that I’d want to do it at a track where I was very comfortable, so that I could focus on the school as much as possible. I got the car prepped (ish) and headed to VIR on Thursday afternoon. 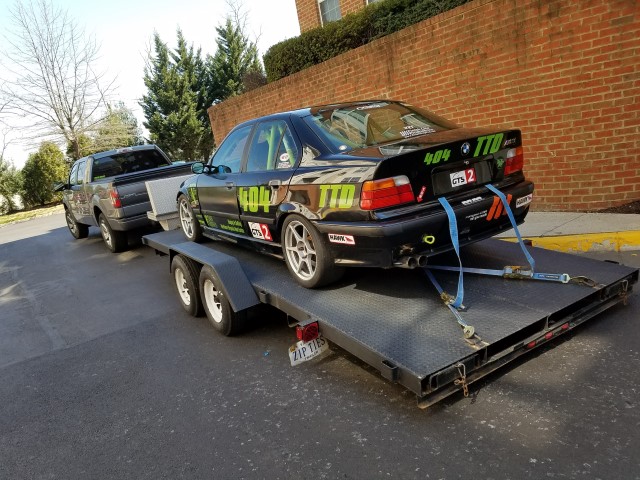 I already had my Annual Tech done (thanks, Deren!) so I just had to unpack, get my Annual sticker, and enjoy the sunset. Ran up to the Tavern and had dinner with our chief instructor Jack and one of his Corvette buddies. Stayed for another drink or two with my friend Zach once he got in.

Comp School
Friday morning rolled around and I was equal parts excited and nervous for the day. Is my driving really that good? Did I study enough for the written exam? Laura grabbed a shot of me checking tire pressures before the day began – after that, I handed the car off to my friend Chris (he was my crew for the day) and headed to class. 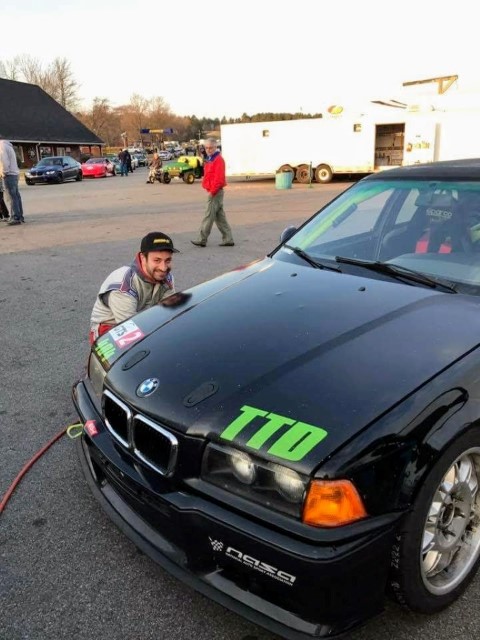 Class was pretty interesting. We talked a lot about racecraft and how to be smart and safe in various situations. The day was structured with 45ish minutes of classroom time followed immediately by 40ish minutes of track time, running drills that we had discussed in class just before.

My car made it through the first round of drills – basic warm up, rolling start and racing – just fine. Chris filled it up with gas and I came out for the second session. Hopped in and it wouldn’t hold an idle at all (it’d die if I was off the throttle). Got out on track and it could hardly crack 100 mph on the back straight. Crap. Also, I had some severe shaking from the brakes when applied. Double crap. I knew I had to just “keep moving” as coming in early from a track session could jeopardize my chances at passing the school. So, I pressed on and tried to carry momentum without using the brakes much. It worked enough to finish the session.

I came in, Chris and I got the car in the air and immediately found two cracked brake rotors. I set about replacing them (only had one spare, of course…) and he looked into the rough running issues. It threw 4 codes related to O2, fuel trim, cam angle sensor, and “multiple misfires detected” (no shit) so we figured a bad ground or vacuum leak.

Unfortunately, time was running short over my lunch break and I only had one of two rotors swapped, with no fix for the poor drivetrain condition. With 8 minutes before class (and subsequent track time) I took off sprinting down the paddock to our chief of compliance Jeff’s parking spot.

I think I showed up looking like my ass was on fire and babbled something about “I have less than 10 minutes until I need a car and mine is broken and I have wheels that will fit yours and you’re not driving it today and I’ll put gas in it and we can talk money later on but can I rent it please and thank you?” He just smiled and was like “of course, bring your wheels over and we’ll get them on while you’re in class.” Jeff and Sri are life savers.

My (new) noble steed for the day: 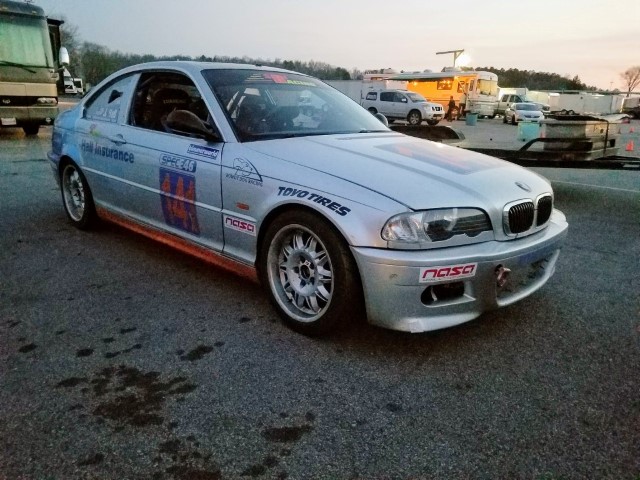 So, I finished the day in a rented Spec E46 on my RS3 street tires. Our post-lunch drills included starts (standing and rolling) as well as side-by-side and leapfrog drills – all of which were a lot of fun. I realized as I came up to the first standing start that I had no real idea where the optimal “launch RPM” was for Jeff’s car, so I just picked ~4200 rpm and went for it. Laid some pretty impressive 11s but it worked.

We concluded the track portion of the day with a fun race, where all of us students mixed it up with Real Life Racers for 25 minutes or so. After the race, we got pulled in for our egress test (out the door in 7.5 seconds in a car I hadn’t practiced in, booyah) and then back to the classroom for the written test.

Only ~8 of us out of the 21 ended up passing and earning our licenses, and I was one of them. This is my “hooray, where’s my beer and I have to fix my car” face. 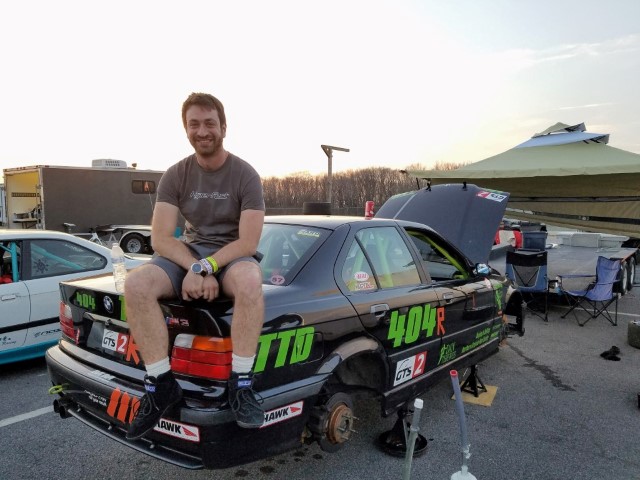 Thankfully, I found a spare rotor (again, from Sri Racing) and the rough running/codes were all due to the ICV hose popping off of the intake boot. Quick fixes FTW.

Doing It For Real
Practice on Saturday morning was like any old HPDE, but with more speed and more talent all around. Not too bad.

Qualifying both days was like TT, except people aren’t nice about “oh, I should let him get a run, he’s on a flyer lap” and you really have to just say “screw it, I’m gonna get mine” while being a little nice but not too nice about it.

The races, holy cow. Chris and Xavier talked about having a plan and being prepared to immedately change it up. My plan lasted from the start stand to about 500′ past it. I didn’t see the green flag on Saturday’s race and just laid into the throttle when I heard the guy next to me do it. I was also in 3rd gear, which was a poor choice given my stock 3.23 rear end. Totally blew the start, lost the pack of GTS2 guys, and spent the entire 25 minute race worrying about getting in peoples’ way, thinking how slow my car was out of corners, and overall just trying to keep my nose clean.

Sunday was much, much better. I qualified ahead of the other GTS2 rookie. Made the decision to judiciously use 2nd gear to make up for my lack of corner-exit power. Also had a good chat Saturday evening with Cobetto about holding my own versus safely getting people in other classes by me.

The start on Sunday was more solid, I still couldn’t quite hang in Turn 1 (everyone wants to be there and it’s a total dog fight) but focused on using all of the available power and again, being clean.

Ended the race on Sunday 6th out of 8 and now have 2 of 4 clean races required to move from my provisional license to the hard card.

Brandon and Adam dove right in to helping a few friends with repairs, alongside Matt and James. Big ups to all of you, I know Tom and Roberto appreciated the help and Roberto was able to go out and perform well in his race on Sunday. Maeng and I mostly drank beer and offered moral support.

Up Next
I’ve already got some wheels in motion (RIP Visa card) to get this car more competitive. Turns out building to the bare minimum of the rules doesn’t go very far, who’dathunk that?

In some particular form of order…

Onward! Looking to have the mounts and diff installed before Dominion at the end of April. 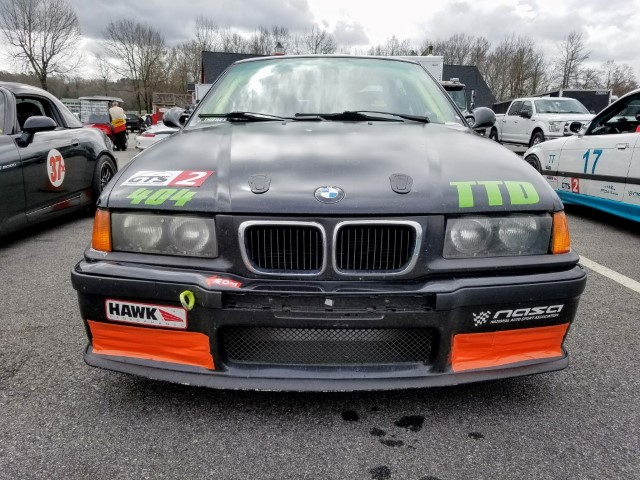