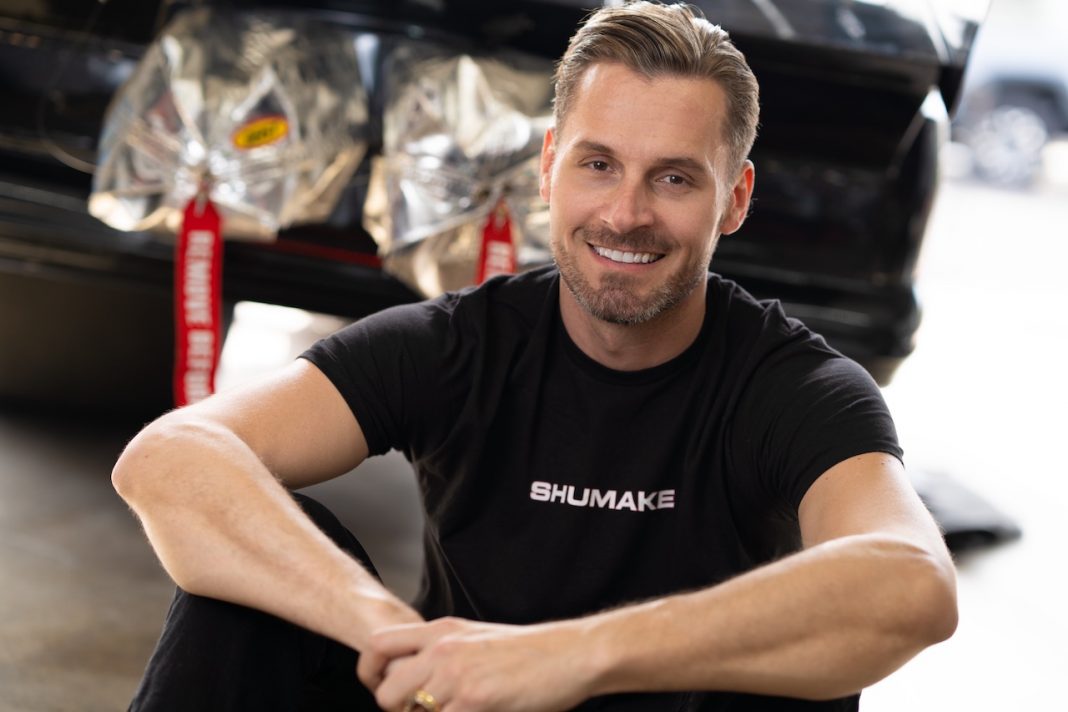 Our biggest goal here is for everyone involved in the car and motorsports scenes to show up as their authentic selves at events. Life is way more fun (and far less stressful) when you aren’t indulging a hobby and hiding a part of yourself at the same time. Seeing others at the amateur level be out and proud at the racetrack is one thing, but it’s another to – finally – see a pro racing driver be open about who they are. Travis Shumake is that pro driver.

Travis got introduced to the world of Funny Car drag racing through his father, Tripp Shumake, who was a racer to start and moved into the role of announcer and color commentator when Travis was about six years old. Spending time around all of the cars and drivers at such a young age was fun, but when his dad passed away, Travis assumed that was the end of racing in his family.

That’s not to say Tripp was the only one into cars in the Shumake family. As Travis put it, “he who dies with the most toys wins,” as the family ended up involved in seemingly every sort of automotive adventure. And though Tripp had passed, the Funny Car flame was still burning inside Travis, ready to be reignited.

Travis said he knew he was gay at a fairly young age, and that his dad was aware of his sexuality, even though they hadn’t “had the conversation” directly. Travis had initially figured the only way to go racing was with his dad’s support, but after attending a few races with his own drag racing family, figured he could do it on his own. After spectating the Gator Nationals in Florida, he decided to go get his NHRA competition licenses and go racing.

There are three different competition licenses within the NHRA, and Travis has earned two of the three so far – SuperComp and Nostalgia Funny Car. He’s licensed to race in dragsters that can achieve speeds up to 285 miles per hour, and working toward his final Nitro race license. Funny Cars powered by nitromethane will hit top speeds up to 330 miles per hour.

Of course, this is all an expensive endeavor, with the cost of one Nostalgia Funny Car race hovering around $10,000. Sponsorships are key at the professional racing level, and I’ve speculated that other pro racers may keep their sexual orientation quiet for fear of losing support or missing out on opportunities entirely. Travis, by comparison, is being so open about himself in an effort to secure sponsors who understand why diversity matters in motorsport.

“I don’t expect to be everyone’s flavor, I hope the conversation about my orientation is brief and [others’] conversations about me are more about my reaction time and performance in the race versus what’s going on in my personal life. There will always be someone you don’t like in racing,” says Travis.

He knows that being so publicly out will benefit others. “Junior drag racing has grown exponentially, kids under fifteen. I want them to come up in the race leagues with coming out not being a thing – it’s probably already happening and they’re coming up in the ranks now.” And showing up very publicly with his Hawaiian-shirt-wearing partner Daryl by his side will absolutely help with the effort. We don’t ask straight racers to hide their spouses, so why should Travis?

I asked Travis what the reception was like from the NHRA and fellow racers so far, and he said it’s been overwhelmingly positive. The sport, he says, “could use some new eyes and some new dollars,” to not only include those embracing sponsors, but more openly-queer fans as well. Countless fans of all ages have reached out to Travis to share their excitement about an openly-gay Funny Car racer, and he’s endearingly calling them his “drag racing gay mafia” of supporters.

Pro racing is – like any other sport – for everyone, whether you’re racing the car, working on the crew, or cheering as a fan in the stands. But there is still quite a stigma in the United States about who the drivers and fans of our professional racing really are. Not every driver or fan is, to put it gently, a Confederate flag enthusiast. But gender and race can’t be hidden for the sake of convenience nearly as easily as sexual orientation, and stigma does lead to many racers and fans doing what’s convenient. Backlash is never fun.

And while some will undoubtedly make cringe-worthy comments in the vein of “shut up and dribble,” Travis’ openness will only benefit the shift in perception that professional racing so desperately needs. I asked Travis about his thoughts on any negative commentary, which he admitted will come with the territory. “I’m not looking for you to let me in,” he said.

Perspectives: On My First Flight Since COVID-19, Rental Car Roulette, and a Mazda3