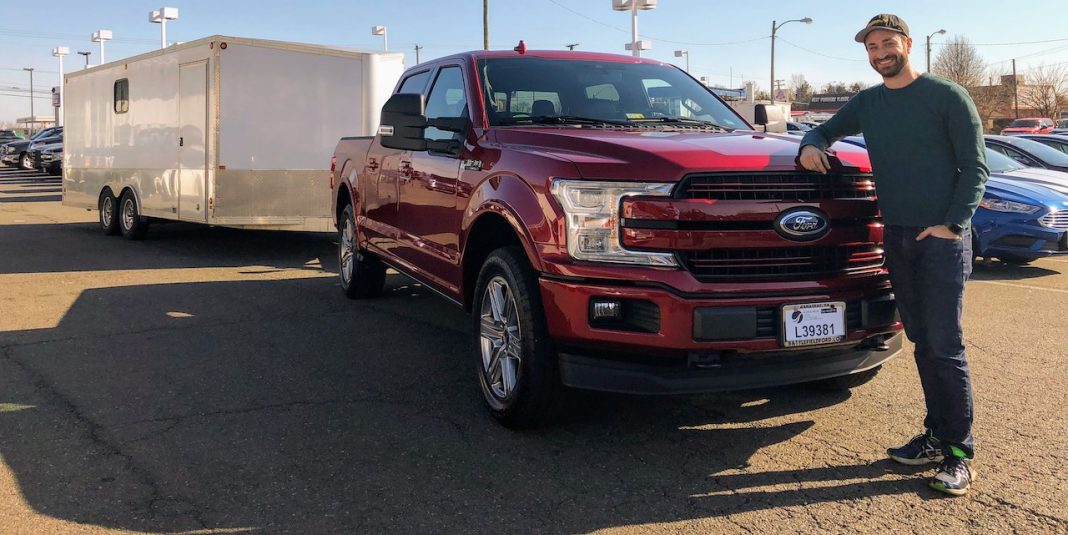 In March of 2018, I was in the market for a new-to-me truck. The 2010 Range Rover I’d been driving was a kickass, reliable vehicle (truly) but not quite up to towing the enclosed trailer that had been purchased at the end of the 2017 racing season. I’d started a new job and decided to spend some of that new-job salary on a brand-new truck. My 2011 Ford F-150 had treated me very well, and I decided on a 2018 F-150 with the revised Coyote 5.0L V8 engine and 10-speed automatic.

This was a big purchase. The dealership happened to have a truck specced exactly as I wanted, and it was the one sitting in the showroom when I walked in. I elected to lease the truck for 39 months and 15,000 miles per year, thinking it could be smart to always have a tow vehicle that is newish, under warranty, and worry-free for longer trips.

The F-150 was an excellent tow vehicle and truck in general. Mine had all of the driver assistance technology, which even worked while towing. The 10-speed had teething pains, but they were quickly resolved after a month or two of ownership with a software update. The revised 5.0L Coyote V8 also displayed some “teething pain” issues, and it took me down a very long, frustrating path that culminated in a buyback (or “repurchase”) of my 2018 F-150 V8.

My 2018 F-150 V8 visited two dealership service departments in 2018, and over the course of four trips to address various recalls or small issues, spent eight days out of service. I knew the engine and transmission were both new for the 2018 model year, though, and figured some shop time might be necessary as with any new hardware. But, as the F-150 and I rounded the corner into 2019, a noise developed from the engine bay.

When the engine and engine oil were cold, I observed a rattle coming from the top of the engine every time I accelerated to 2,500 rpm and lifted off the throttle. It was easy to hear, as I parked the truck in the concrete parking garage under my apartment. Any abnormal noises reflected off of the concrete walls and were amplified back into the cabin. After hearing the rattle, I started taking note of when it would happen. A warm engine with hot oil circulating produced no noise, but sure enough, every morning, I got to listen to something rattle as I made my way out of the parking garage and down Wilson Boulevard. It made for a very annoying couple of miles, especially given I was driving a brand-new truck with about 10,000 miles on the odometer.

As I noticed this mysterious rattle, I started doing some research. Ford doesn’t publicly release Technical Service Bulletin information, but published TSBs are often found on web forums with quick searches. I came across a thread on F150Forum.com discussing my exact issue and – great news! – Ford had issued a TSB for the problem. For the uninitiated, a Technical Service Bulletin is manufacturer-speak for “they don’t all have this problem, but if the customer complains of this problem on their particular vehicle, here’s a fix.”

The suggested fix was a software update to the engine computer. On January 10, 2019 with 13,817 miles, I took my truck to the local dealership and reported the problem. They applied the TSB fix to my F-150’s engine computer. The service writer noted “The noise is a lot better, but some is still present. Some noise is a normal characteristic of this engine.”

In Which “Some” Does Not Equal “All”

After retrieving my F-150 from the service department, I woke up the next morning eager to leave the parking garage with a quieter engine. Nope. Once the oil had cooled, the rattle was as loud as before – even with the TSB’s software fix applied.

I returned to the same dealership a few weeks later, and asked them to diagnose the issue further as the TSB fix didn’t seem to do anything to my particular truck. While my service advisor was sympathetic, he and the technician claimed the noise was just a normal characteristic of the 2018-and-newer 5.0L V8 engine.

On To The Next Dealership

Finding the “they all do that” response from the first Ford dealership to be unsatisfactory, I gave Ford’s customer service hotline a call. The gentleman on the other end of the phone suggested I get a second opinion from a different service department. Off I went to my selling dealer – a 40-mile round-trip drive in DC metro traffic, but worth the drive if I could get a service advisor who’d listen and communicate effectively.

Dave, as it turned out, could do those things. He was very candid and willing to have actual discussion, instead of simply parroting whatever Ford’s computers told him. On February 21, 2019, Dave took my truck for the first time and identified the rattle using a stethoscope. According to the paperwork, “Found rattle noise internal to VCT solenoids. Performed hotline research, found multiple cases of similar noise reported with no results.”

VCT stands for Variable Camshaft Timing. The solenoids allow the engine timing to be adjusted and rely on both oil pressure and electronics to make adjustments. Ford updated the Coyote V8 for 2018 to include direct injection, and the VCT solenoids were apparently updated for 2018 as well.

Although Dave was far more empathetic to my case, he told me that without Ford corporate’s approval, there wasn’t much that he could do to immediately help. I took the truck home and vowed to keep investigating on my own.

Back for an Extended Stay

Two weeks later, I called Dave back and expressed my frustration. The F-150 was still making this noise, Ford’s fix didn’t work, and he was the only person willing to talk to me like I had a shred of intelligence. I asked that he take the truck back and keep it for as long as necessary to figure out a solution. He agreed to press Ford harder and put me in a loaner F-150 with the 3.5L EcoBoost V6 while doing so.

Dave kept my 2018 F-150 V8 for a month and provided updates as he investigated. He indicated this issue also affected 2018+ Mustangs, which a brief Google search confirmed. Otherwise, though, Dave hadn’t been able to make much progress. “I can replace your timing chain, the VCT solenoids, and everything in between, but there’s no guarantee that the noise won’t come back as the new parts break in.”

Although Dave had been a saint, Ford in general had expressed little desire to admit their fix was a failure. I needed help from people with more influence than one annoyed customer. My owners’ manual indicated the Better Business Bureau would be “those people.”

Opening a Case With the BBB Auto Line

The Better Business Bureau’s Auto Line program is, more or less, a “Lemon Law” program without the lawyers. The BBB defines cases in which manufacturers must repurchase or replace a customer’s vehicle, and manufacturers voluntarily participate in the program. On April 29, 2019, I opened a case with the BBB Auto Line.

After a phone call with my BBB Auto Line advisor, I was elated. Finally, someone on my side! The advisor reached out to Ford with the details of my case, and I was told to bring the truck back in for an inspection by Ford’s corporate technicians. After that inspection on May 30, I waited for next steps.

All communication between myself and Ford was through the BBB Auto Line. On July 2, 2019, following the inspection about a month prior, I was advised that Ford still considered the noise normal because “they all do it.” Again, “some” does not equal “all.” The BBB asked if I was satisfied with the answer, and if not, what it would take to achieve a resolution. I requested Ford buy the truck back and terminate my lease.

A Repurchase on Principle

On the surface, this entire process sounds a little silly. Yes, I asked for Ford to take my truck back because they couldn’t fix a noise. However, the noise was coming from engine timing components. There was no way to know if internal damage was taking place. Ford had admitted some trucks had a problem, issued a fix, then thrown their hands up when the fix didn’t do anything.

This truck represented years of hard work and career growth. I had reached a place, income-wise, where I could go pick out nearly any new F-150 on the lot and bring it home. I was proud to call Clifford my own, and the wind had been knocked out of my sails as I went through this whole process.

We Moved to Arbitration, Sort Of

On July 11, I received a phone call from the BBB Auto Line. A date had been set and my case was moving to arbitration! My case was set to be heard on July 26 by an independent arbitrator. Ford and I would each have 20 minutes to present our sides of the story, I would be able to demonstrate the rattle to all parties present, and a decision would be made. Being the consultant I am, I prepared a short PowerPoint deck that summarized everything to date. In the end, I never had to share it.

Ford elected to send a letter prior to the hearing, establishing their position and recommending against a buyback. Per BBB Auto Line policy, I received a copy of the letter and eagerly scanned it. The amount of misinformation was shocking. Ford’s position featured incorrect details from one repair order, ignored another entirely, and miscounted the number of days my truck was out of service.

I amended Ford’s letter with the correct information and sent it back to the BBB Auto Line, who shared it with Ford the next morning. Two days later, on July 18, my Auto Line representative emailed me with an update. Ford had received my response and elected to offer a buyback while skipping the arbitration process entirely.

After examining the initial offer, I accepted. Ford put me in a rental car while they worked out the details of my settlement. Per BBB Auto Line rules, Ford had 30 days to process the settlement and provide details. Naturally, they took about 29 days to get back to us. The details were favorable, though. I received all of my lease payments back, save for a “usage fee” that correlated to the truck’s mileage. This worked out to about half of the lease payments being returned.

My 2018 Ford F-150 V8 was out of service for 54 days, which amounted to nearly 11% of my ownership. I made over $1,500 in nice-truck-money lease payments while driving base model Focuses, Escapes, and F-150s. I spent 12 hours of my paid time off driving between dealerships.

At the time of my arbitration, the F150Forum.com forum thread reached 133 pages in length, with 104 individuals reporting the same problem and lack of resolution. The thread is up to 151 pages and 1,508 replies. I cannot say how many additional folks have reported the problem, as I went through all 133 pages back in July to hand-count user names and have little desire to repeat that process.

On August 29, 2019, I returned Clifford, my 2018 Ford F-150 Lariat 502A with Technology Package to the dealership where I had excitedly picked it out about 18 months prior. I was sad to see it go, but happy that Ford finally made things right. The BBB Auto Line process was drawn out, but did work in my favor. The entire process required diligent record-keeping but cost me nothing, monetarily.

I struggled with the decision to write this piece. My intent is not to drag Ford through the mud, given they did make things right after some coercion. The bigger issue at hand, though, is that non-luxury brands are selling vehicles – trucks, in particular – that cost as much as luxury cars. The service experience needs to reflect such pricing. My F-150 had an MSRP around $61,000. Would Mercedes-Benz or BMW have treated me the same way, or would they have tried harder to solve my problem?