The Gambler 500 isn’t the most friendly event for a vehicle to partake in, let alone if the vehicle wasn’t really made to exist outside of a city. Typical Gambler 500 vehicles are former work commuters turned Mad Max-inspired creations or conversion vans painted like the ambulance from Cannonball Run. What you usually won’t see out there are a smart fortwo or a motorcycle.

I suppose that’s where I came in. I love wacky vehicles and challenging myself. I’ll write about my story driving a mostly stock smart fortwo offroad in last year’s Illinois Gambler 500 at a later date. Today is all about my lovely and horrifyingly janky project for this year’s Illinois Gambler 500, a 1986 Honda Elite 150D I call “Imperator Slowiosa III”. Yes, the name does imply that I’ve attempted to build a scooter for this two previous times and presumably failed. This time, third time’s the charm.

I broke this little scooter the day I brought it home. I locked the bars and almost immediately discovered the ignition was permanently stuck in the locked position. No amounts of lube or force could get it to budge. Eventually I tried too hard and the key completely snapped off.

Before I Even get Started on Prepping This Scooter I Will Have to Repair it.

A lot of people do not like buying old or Chinese motorcycles because parts can be exceedingly rare. And sure, while tanks and other body parts can be hard to find as time goes on, most engine-external critical parts are really only an eBay or Amazon search away. I can have a carburetor sitting on my doorstep before I even come home from work. Ignitions are no different. While exact replacement ignitions are $100+ (about a third of what I paid for the scoot), ignitions for Chinese scooters are only $13 and require minimal modification to work with whatever ride you have. All you have to do is a wire swap!

A couple days after an eBay search I had my ignition. It had the correct amount of wires, but the wrong connector. Armed with a tiny drill bit, this problem was rectified in roughly five minutes. I’ve read reviews where people couldn’t figure out the wires. I combated that by removing one wire from the connector at a time and immediately replacing it with a wire of the corresponding colour from the new ignition.

These Hondas are to varying degrees built like a car and that had me very amused.

They have a bonnet and under them you’ll find everything you’ll find under a car’s bonnet, save for the engine itself. To get at the ignition, pop open the front panel, prop it up (a breaker bar works fine), then locate the ignition. Remove the two screws, undo the connector, then yank it out.

After you transfer the connector and the bracket, you’ll be ready to install the new ignition!

Unfortunately for me, the new ignition’s fork locking pin is a couple millimeters longer than the original ignition, so to prevent the forks from locking while unlocked, I only reinstalled one of the bolts. I probably wouldn’t recommend this on a scooter you don’t want stolen, but for this purpose it works just fine.

After completing the ignition swap, I decided to run carb cleaner through the carb then took it for a top speed run. With a full on WOT send it made it to 65 mph! And that’s on the stock CDI! It definitely has a bit of a death wobble at high speed, but the new front wheel/brake/mounted tyre/bearing combo coming in today ought to fix that. The new wheel also has an offroad tire mounted to it. Since these are easily disassembled two piece wheels, that tyre will go in back and the more street rubber will go up front.

Now With That out of the Way

Next, I decided to tackle maintenance and adding electrical modifications. Since I’ll be riding this 500 miles through a part of the country I’m not aware of, I’m going to need my phone. I’ll also want some tunes so I’m not just listening to the wind for hours on end. Unfortunately, that means I need power. I also want to add some offroad cred to the scooter with the addition of lighting. One quick searcn on Amazon and after a couple days even more parts were dumped onto my doorstep.

The thing I first wanted to install were my spotlights. I love the look of these things and I got nothing else done, I definitely wanted these on the scoot. Placement was about the hardest part about installation. I wanted to mount them on the sides so they would stick out in an aggressive manner. However, given that I’ve never ridden offroad I would almost certainly shear them off dropping the scooter. The next proposed place was on the bars. However, since the bars turn, so would the wiring I would inevitably be poor at. This left the only logical place as the bonnet. Fine, I can work with that.

It’s Good to Have a bag of Bolts

The bolts supplied with the spotlights definitely weren’t made to be mounted to thin plastic. This forced me to do some substitutions. I dug into my bag of random bolts and pulled out a short flanged bolt and a short bolt with a thick washer still threaded through it. Perfect! I got down on the ground and wrenched away (and I started far too late into the night). With my beautiful lights installed, I now had the confidence to move forward to the real fun.

The end result is that these lights:

Didn’t puncture the coolant line under the bonnet:

When I installed the same kind of spotlights to my smart, all I needed to do was wire them up to a fuse, the car’s onboard computer has an open switched slot so no manual switches are needed. Well, this scooter is older than I am and there isn’t a computer of any sort onboard. That means I have to wire a switch. I took the easy way out and bought a harness from Amazon that came with everything I needed to get this working.

Somehow I never thought about the sheer length of the harness. After all, my scooter isn’t a pickup truck. D’oh! With the help of drowsyness I came up with a brilliant fix, zip ties! I then connected the lights to the harness using the neat crimp clips that came with the harness and started tracing a route to the battery using the a drill and oh so many zip ties. The end result was something that looked like it could have been inspired by the Back to the Future DeLorean. But hey, it works, right?

Next came something I’d argue was even more important, the USB ports. Amazingly you can get USB hub harnesses that wire directly to your battery off. I placed it and the switch for the lights in front of the carburetor.

I gave it a test run this morning and everything seems okay. I’m not entirely sure due to the low speed and low mile trips. After I fix the death wobble tonight I’ll give it a full on test. This aside, I don’t have much left to do. I just have to rig up a snorkel, the mount for my bluetooth speaker (more zip ties), install a derestricted CDI, some sort of beer implement, and do the brakes on my smart.

Stay tuned for further updates! Still to come: Sorting the rubber that meets the road, the mechanicals, and how this former police car became a very large campfire! 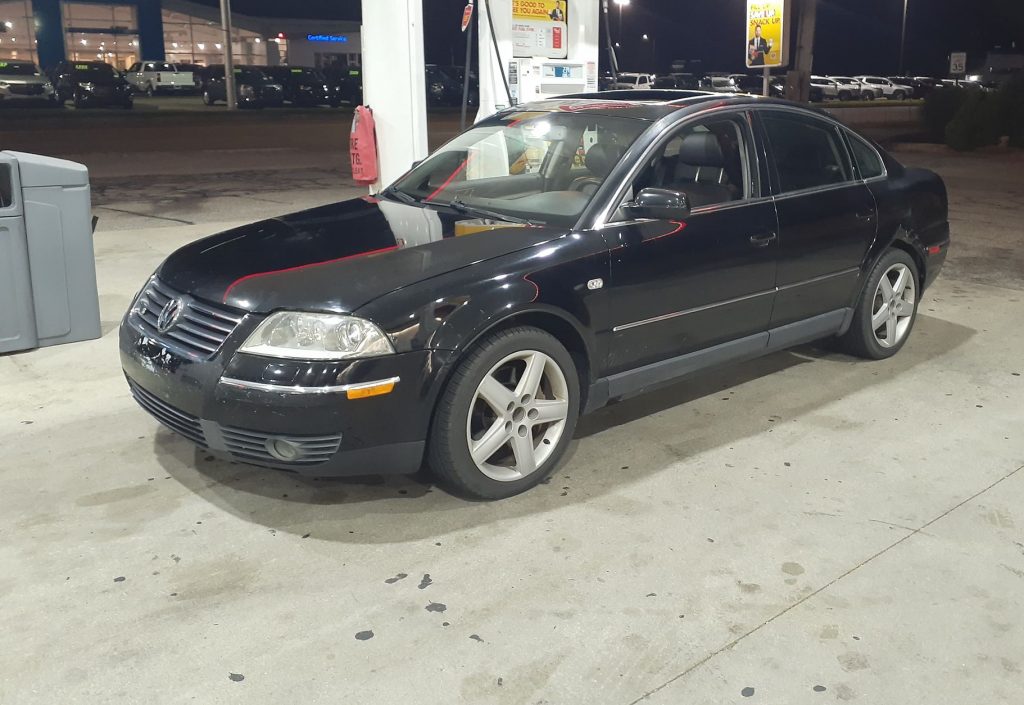 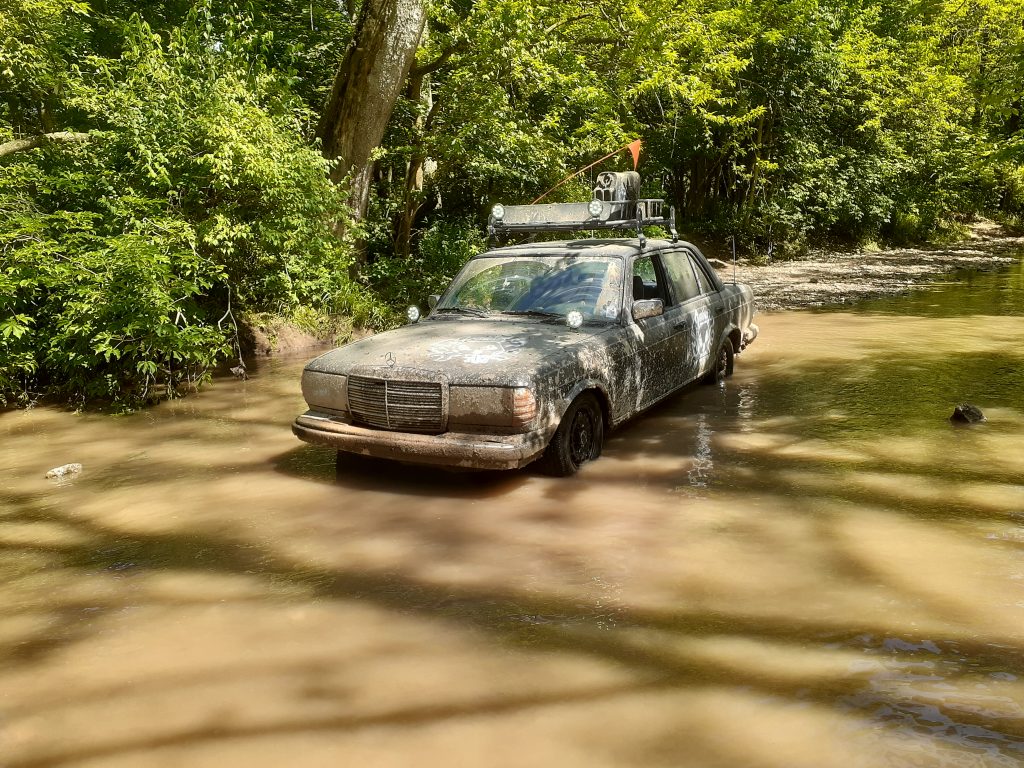