Hyperfest is my favorite NASA Mid-Atlantic event of the year. We turn everything even remotely racecar-related up to 11, and invite the public to come join in the fun by driving, riding along, or spectating. With drift shows, burnout contests, rally rides, an off-road course, downhill Power Wheels race, and (this year) a DJ flown in from Japan, there’s really something for everyone. And of course, all of us road racers get even more amped up as we have quite the crowd of spectators gathered at the fence all around VIR’s 3.2 mile circuit.

Friday saw the Tire Rack Ultimate Track Car Challenge (UTCC) take place. They’ve been a part of the Hyperfest weekend for years, and it’s fun to see some really interesting and/or unique builds show up to compete, time-trial style, against the clock all day long. Unfortunately, Friday was also saddled with some incredible amounts of rain. Every group that went on track, from UTCC to test-and-tune sessions, dealt with the constant decision of “rains or drys” when it came to tires. The weather kept changing, and it didn’t look great for the big day on Saturday.

I managed to snag a set of “take off” Toyo RA-1 tires from a Spec E46 racer on Friday afternoon, and had Phil and Kim of Phil’s Tire Service mount them on my Kosei wheels. They were used tires, but at least I’d have a set with tread in case Saturday proved to be wet. And at $30 per tire, why not pick them up?

Saturday morning was, true to form, met with some rain. Those Toyos came in handy for our qualifying session, where I didn’t break any records with my lap time (nobody did) but got around safely. The rain broke before lunchtime, and the afternoon of Hyperfest was fairly sunny. Crowds wandered into the paddock, and I agreed to give two guys rides in my racecar after our mid-afternoon Typhoon race.

After changing the Toyos back out for my standard BFGoodrich R1 “dry” tires, I puttered up to grid and took my spot. I’d had Mom bring a set of earbuds, so we could make a phone call on grid and have her act as my “spotter,” shouting out when the green flag dropped in case it wasn’t immediately visible to me. Our plan worked and I had a pretty good start as a result! The 25-minute race quickly came to a near-halt as the double-yellows came back out. Someone had gone off-track, and given the wet grass, gone for a long ride that ended with them needing a tow immediately to be pulled out of harm’s way.

Mom handled the restart well and we were back at it. Only a lap or two later, though, we got another set of double-yellows. Everyone seemed pent-up with so much rainfall, and started sprinting harder with each restart, given the already short race length. I was now toward the back of the GTS2 and Spec E46 pack, with Spec E30s on my tail for the single-file restart. The yellows dropped and we were racing again. I had one of our GTS2 rookies close in my sights, and had to get past a Spec E46 to catch him. Fearing a too-close pass attempt at Turn 10, I tucked in behind the SE46 and planned to get past at the exit of Oak Tree. Unfortunately, I tapped the brakes a bit too hard and by the time we reached Oak Tree, found myself alongside the SE30 front-runners.

“Not bad,” I thought, “just get through Oak Tree and catch the others,” as we were all in a large group. With Robert on my right, the two of us went through the entry to Oak Tree clean and close. Jason was hot on Robert’s tail but again, came along the inside cleanly. And then, as we exited… *bump* and I was sideways. Before I could process much, I took another hard hit to my left rear. I looked out the driver’s window as I sat, stalled, perpendicular to a slew of oncoming BMWs, and wondered if I’d next take one to the driver’s door while I frantically re-cranked the car. Thankfully, everyone else avoided me. As the car re-fired, I slammed it back into 1st and dumped the clutch.

It was pretty obvious that something wasn’t right as I gained speed – something was dragging. I called it over the phone and came into the pits. My race was over in just a few short laps. 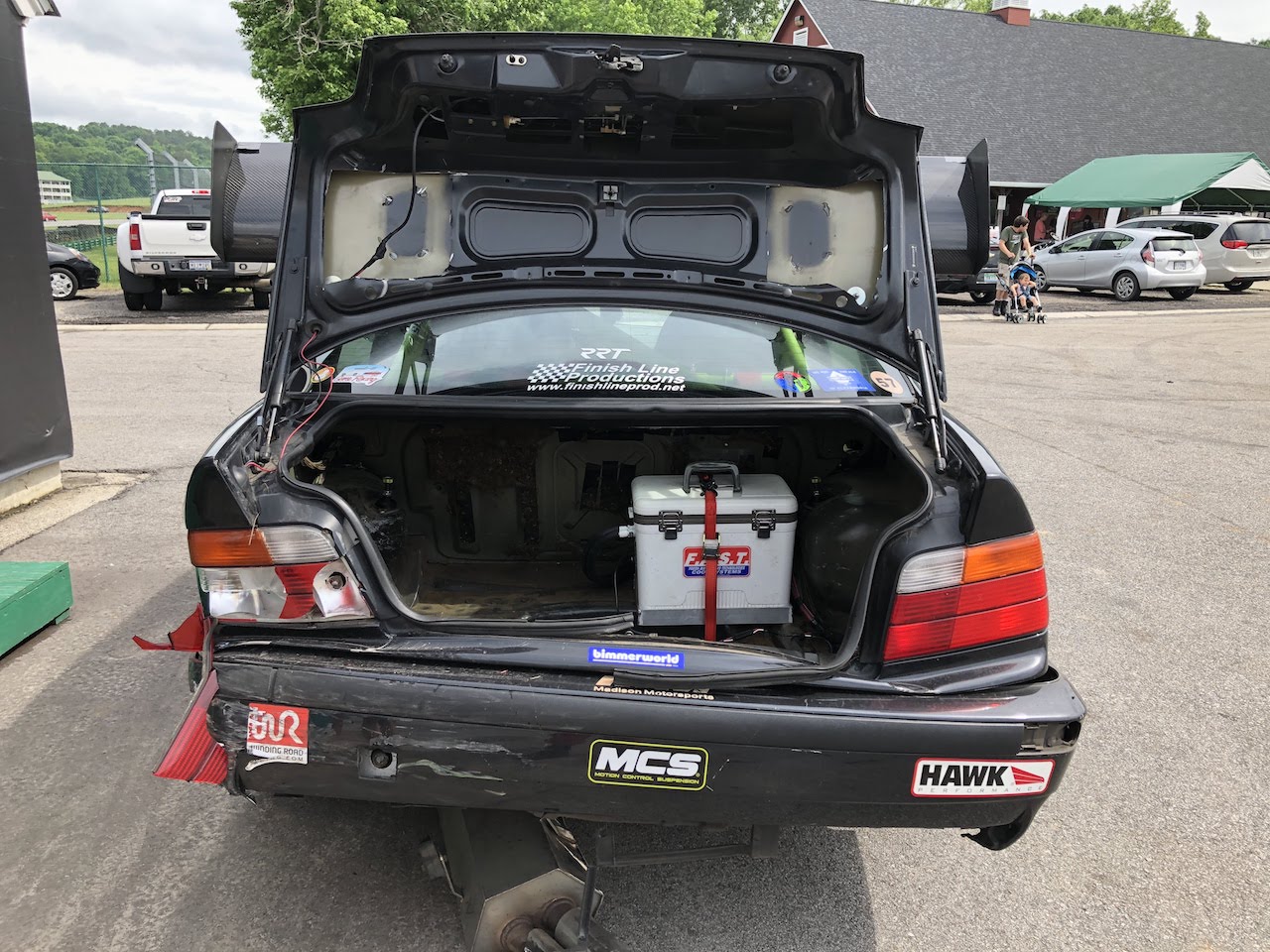 As I pulled into the paddock, I coasted right up to the tech shed, a mix of upset, confused, and livid. I’ve crashed the car before, but it was my own doing. Now it was time to watch some video with the Compliance officials, fill out body contact forms, and sort this out. My poor BMW sat outside the tech shed with the rear end askew. My parents and friends came up to check on everything and everyone, relieved I (and we) were okay but sharing in my frustrations. The instigator claimed his Spec E30 experienced some sort of brake failure, or “ice mode,” or similar issue, and he didn’t mean to rear-end Jason, who then impacted my passenger rear corner. Video all supported that claim. The initial instigator is the one who also hit my left rear after I spun, as he carried on through the exit of Oak Tree. No points were assessed to any of us, as it was considered a “melee” and hard to assign true fault given the proof at the time. We shook hands and parted ways, and I focused on the fun of the evening ahead.

My friends Taylor and Tyler purchased a Ford Windstar before coming to Hyperfest, and entered it in the burnout competition. It put off a surprising amount of tire smoke, as the guys re-routed the windshield washer lines to spray water on the front tires. According to Taylor, all it took was a neutral-drop into 1st and a steady finger on the washer fluid button to get things smoking. The burnout contest, alongside some good banter at the Honda Challenge paddock, was a great way to end the evening with a lot of laughter, good food, and some cold beers.

We tried to get my M3 back on track Sunday morning, with the exhaust safety-wired to the chassis and trunk lid ratchet-strapped shut. Although I made it through the 15-minute qualifying, the safety wire failed on the second green lap of Sunday’s race. It was a good effort, but one that didn’t hold up long enough. 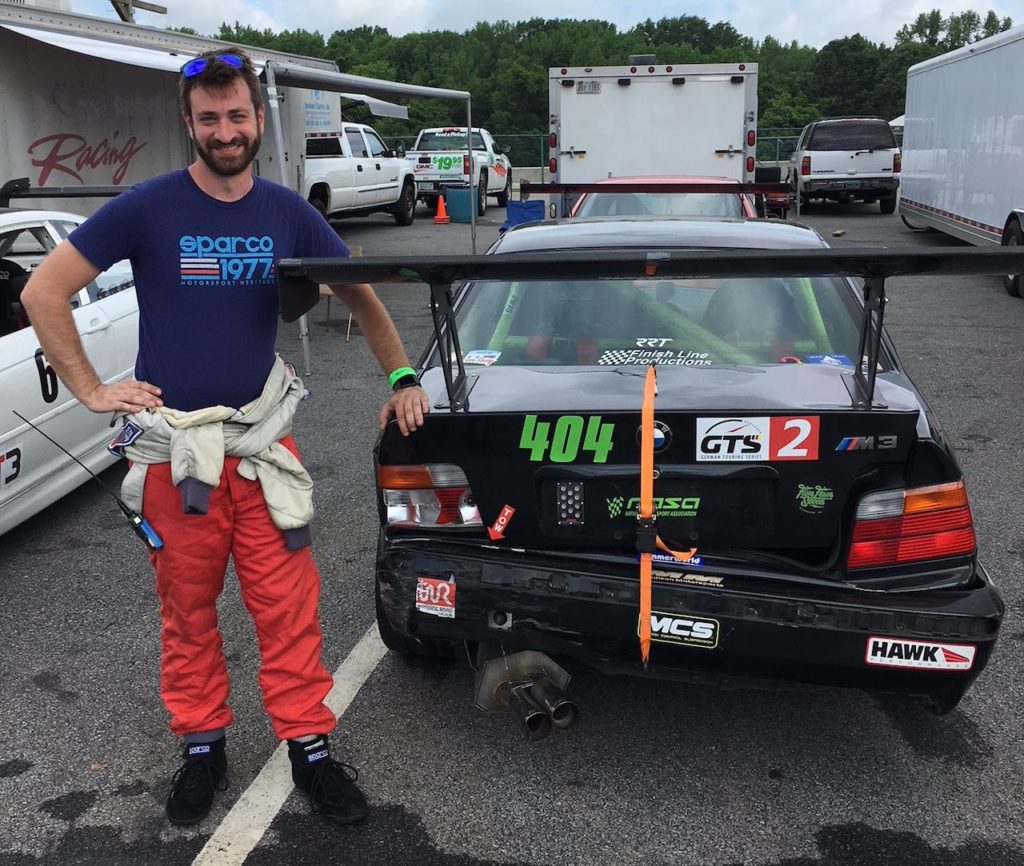 After returning back to work on Monday, I was contacted through Instagram from another Spec E30 racer. He was behind all of us when the “melee” took place, he said, and had good video that he’d be happy to share. He sent it on to me and the chief of Compliance for further review. It painted a different picture, one where the instigator appeared to have “dive-bombed” the turn in an apparent defensive move, and hit Jason as a result. The defensive move may have worked, but it resulted in several damaged cars as a result. The “no points” assessment was revised, and the Spec E30 driver who started the mess was placed on probation as a result.

My racecar is being worked on at a local body shop, thanks to one of our Honda Challenge racers who offered to help get it back together. I should have it back for our combined NASA Great Lakes/Mid-Atlantic race weekend at Pitt Race in July, good as new but with a few more dents and ripples in the bodywork. And, I’m considering adding a rear-facing camera to my car. In the end, there aren’t any hard feelings. We all make mistakes and poor judgement calls that end in bent-up cars – it’s a risk we collectively accept every time we take the green flag. That said, it’s frustrating nonetheless and a good reminder that even if you are being mindful, there’s plenty to influence your race that is beyond your control.

The start of the 2018 season has been challenging, but I am excited to get out to Pitt Race next month and get back in a more positive groove at our home tracks in August and beyond!

3 thoughts on “A Rainy, Crashy Hyperfest at VIR”