We’ve referred to the first NASA Mid-Atlantic event of the season as “March Madness” for years, but this one really lived up to the name. After a few months of working on the racecar (well, mostly having ‘Uncle Deren’ at Mach V work on it) and prepping both my new truck and new trailer (separate post incoming) for the year, I was ready to roll. My friend Matt came to my apartment on Thursday afternoon, left his BMW in my garage, and we hit the road around 2 PM with VIR set as the destination in the truck’s navigation system. For once, we hit absolutely no traffic on I-95 South, and made very good time to the track.

Having an enclosed trailer means unpacking at the track is far less involved – roll the car out, grab your spare wheels, and call it good. We grabbed dinner at the Tavern on Thursday evening before calling it a night.

Friday was a test day, combined with sessions for NASA’s “SuperComp” competition school. SuperComp students go through a series of classroom sessions and chunks of track time to practice various aspects of race driving. After the full day, assuming they pass all of the driving exercises and a written test, the students receive their wheel-to-wheel racing licenses. I went through the school last March and it’s no joke.

Phil and Kim of Phil’s Tire Service were able to get my new BFGoodrich tires mounted on Friday, so I took the M3 out for some test laps on the new suspension, then refueled and waited for the “fun race” at the end of the day. The SuperComp fun race involves a bunch of experienced racers from all classes mixing it up with the rookies for 40 minutes. It’s a bit hectic and a ton of fun. Everyone did well and I got comfortable with the new MCS dampers.

A large crowd of Madison Motorsports students showed up Friday afternoon, ready for a weekend of fun. We ended up having a quiet, responsible time discussing many topics as a group inside my trailer, as it got pretty cold out that night – down to the low 30s! Fun fact: a 20′ CargoPro trailer can fit roughly 16 people before feeling “a bit crowded.” 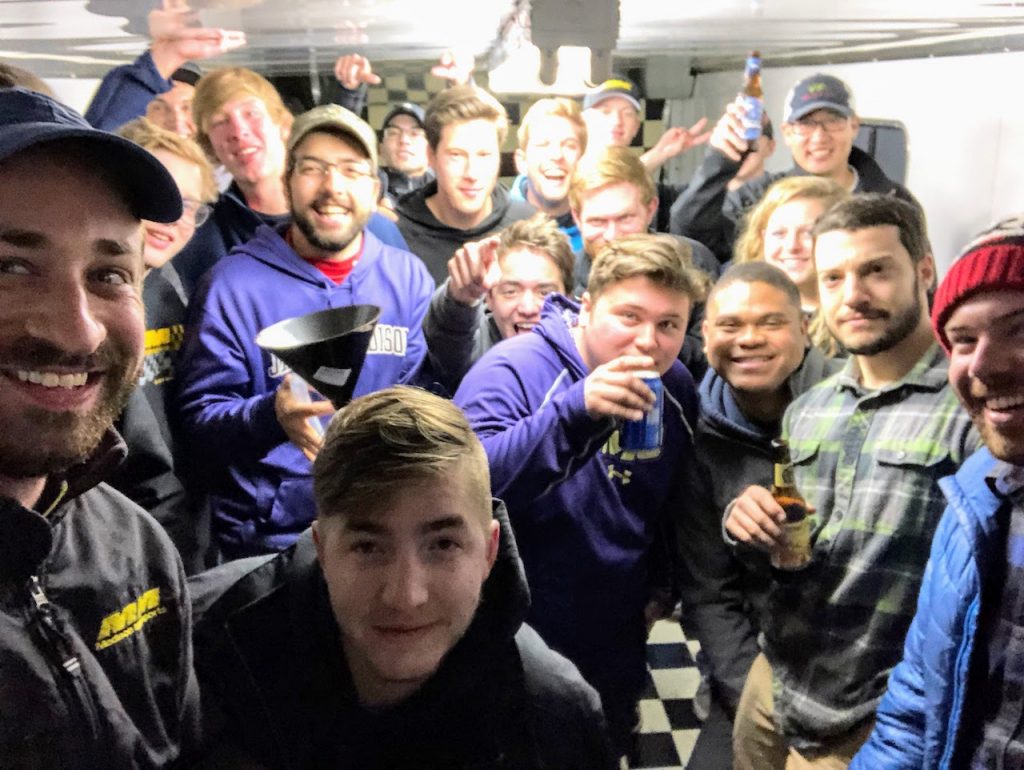 Saturday morning was cold but promised to be fun. I gridded up for practice and went out for some laps. Toward the end of the session, I was coming out of Oak Tree, got to the top of 4th gear and went for 5th. *grind* Okay, try again. As I let the clutch out, my brain registered “shit, that’s 3rd!” Alas, I was too late, and saw the tachometer needle wind itself past the 8,000 rpm indicated on the gauge and smack the “8 mpg” number on the fuel economy gauge below. Oooops. I finished the session and brought the car in, sounding fine at the time. Once it cooled down, however, something was off. It idled like a diesel engine and under load, would not accelerate very well. I pulled in after one green lap of qualifying and parked it.

Some conversation with various mechanic friends lead everyone to the same conclusion – I’ve got a few bent valves in the head. My S52 engine has nearly five years of track abuse on it (about 10k miles, I think), so it’s time to pull the head and have things looked at. As always, Deren at Mach V Motorsports is coming through for me and will be taking a look next weekend.

We woke up Sunday to about 3.5″ of snow on the ground, along with a ton of fog as the sun rose. Everyone was invited to drive their street cars on track at reasonable speeds to help clear the snow and slush from the asphalt. I took a few students’ cars out with them riding shotgun for some fun, if slow laps. Thankfully, the fog lifted around 10:30 AM and we were able to have a fun day with sunny, 55° weather. I hopped in my friend Taylor’s 2018 GTI to instruct him for a few sessions of HPDE 1 that afternoon, and we had a great time getting some hot laps in.

This was not the weekend I was looking to have, but I also figured the engine in my car would go ‘pop’ eventually. I am hoping a simple valve job is all it needs, but we’ll know for sure once Deren tears into things. Thankfully, I still had a blast with the NASA family per usual. I’m eager to be back in the driver’s seat and am hoping it’ll work out for our next event at Summit Point in April!