Land Rover’s early years in the United States saw a simple product lineup: the Defender was the small off-roader, and the Range Rover was the larger, nicer off-roader. Since then, their range of models has expanded in every direction, and they enter 2018 with seven distinct offerings, of varying sense to the casual observer. When I was handed the keys to this 2018 Discovery Sport, I had little idea what to make of it.

[Land Rover wanted me to drive this Discovery Sport so badly that they installed a Takata airbag in my 2010 Range Rover eight years ago, issued a recall recently, and let me take this new, wayward vehicle for a few days while a less shrapnel-y airbag was fitted to my old Range Rover courtesy of Rosenthal Land Rover.]

This is a 2018 Land Rover Discovery Sport HSE. It’s got the less-powerful of the two 2.0L turbocharged four-cylinder engines, making 237 hp and 251 ft-lb of torque at just 1,250 rpm. That Land-Rover-designed “Ingenium” engine (new in 2016, prior turbo-four LRs used a Ford 2.0L EcoBoost) is paired to a ZF 9-speed automatic transmission and all-wheel-drive. There is no transfer case for low range, and the differentials do not lock. Buyers do still get “Terrain Response,” which will tune the traction and stability control, among other bits, for the type of terrain you claim you’re driving on.

It does 0-60 mph in 7.something seconds which is entirely adequate for shooting gaps in D.C. traffic on your way to that activewear sale in Georgetown.

The Discovery Sport was launched to replace the LR2, which replaced the Freelander. Land Rover went through a bunch of names in the States, largely due to past reliability issues that Americans didn’t forget. Regardless, this is positioned as the absolute entry-level model. If you want entry-level with more bling and less headroom, go lease an Evoque.

The HSE trim adds a bunch of items that I figured were standard until I checked online. Xenon headlights, these swoopy, odd 18″ wheels, front foglights, and “passive entry” with the key fob are all part of the mid-tier trim. Additionally, you get a fixed panoramic roof (that I wish opened, especially on a 70* February day), front parking aid, and a “powered gesture tailgate” that I couldn’t figure out.

This example, finished in non-metallic-couldn’t-you-pick-a-more-interesting-color black over black leather, has a MSRP of roughly $46,150.

In a single word… elastic. The entire car feels just a bit out-of-sync with itself. There is an annoying delay in throttle application, where the first little bit of travel results in no forward movement. This is super fun in traffic or when creeping through a parking garage. The 9-speed automatic shifts frequently in an attempt to always keep the tachometer at 1,000 rpm.

On the flip side, the brake pedal has a lot of initial bite (great) and quickly goes soft, with little feedback (less great). What you experience in the initial application of either pedal is the opposite of what you get when you prod either one to a usable amount.

Steering  is electronic, and very light at parking lot speeds. It firms up nicely, although a bit much in the 10-25 mph range. The steering rack has a quick ratio but doesn’t turn very far, requiring frequent three-point turns.

One high point of the Discovery Sport is the ride. It’s composed, soft enough in town over bumps and potholes, and firm on the highway.

Older Land Rovers had fantastic visibility with tall windows and boxy bodies. This is not the case with the Discovery Sport. It’s impossible to see the corners or nose of the car, making tight maneuvers nerve-wracking. Rear visibility is poor, with thick pillars and headrests that block what little view remains through the back window.

Headroom is not excessive, but fine for me at 6’1″, in both rows. I was able to “sit behind myself” with ease. The cargo area is large, perfect for hauling a few sets of tires to get mounted for race season.

Forget the Driving Experience, Tell Me About the Rest

My Discovery Sport had the “base” sound system, which is pretty damn good given you can option a higher-end Meridian system. The infotainment system in general is easy to use, although it moves slowly between screens – my 2010 Range Rover has a snappier interface. Graphics are well-designed and the screen is crisp.

Lane Keep Assist will nudge the steering wheel to keep you in your lane, assuming it can see the lane markings (i.e. it won’t work well at night). You’ll ping-pong around the lane a bit, but if you’re too busy checking Snapchat to be bothered with actually driving, it’ll do its best.

One of the biggest “letdown” aspects of this car is, honestly, the key. It’s a generic rectangular fob with a metal emergency key hidden inside, like nearly every other new car. Unfortunately, pressing any button on the fob made the entire key creak. The back is a shiny, black plastic with a large silver Land Rover logo printed in the center. The printed logo looks cheap, for lack of a better term, and the shiny plastic has already picked up a lot of fine scratches in just 2,300 miles of use. It’s disappointing given the Discovery Sport can be optioned north of $50,000.

I have no use for this type of vehicle – the only SUVs that interest me are those with fairly long wheelbases and high tow ratings, for obvious reasons. That said, I see the appeal in this segment to many. The Discovery Sport is indeed the entry-level approach to the Land Rover brand… but it is just okay, which doesn’t cut it in a highly competitive segment. 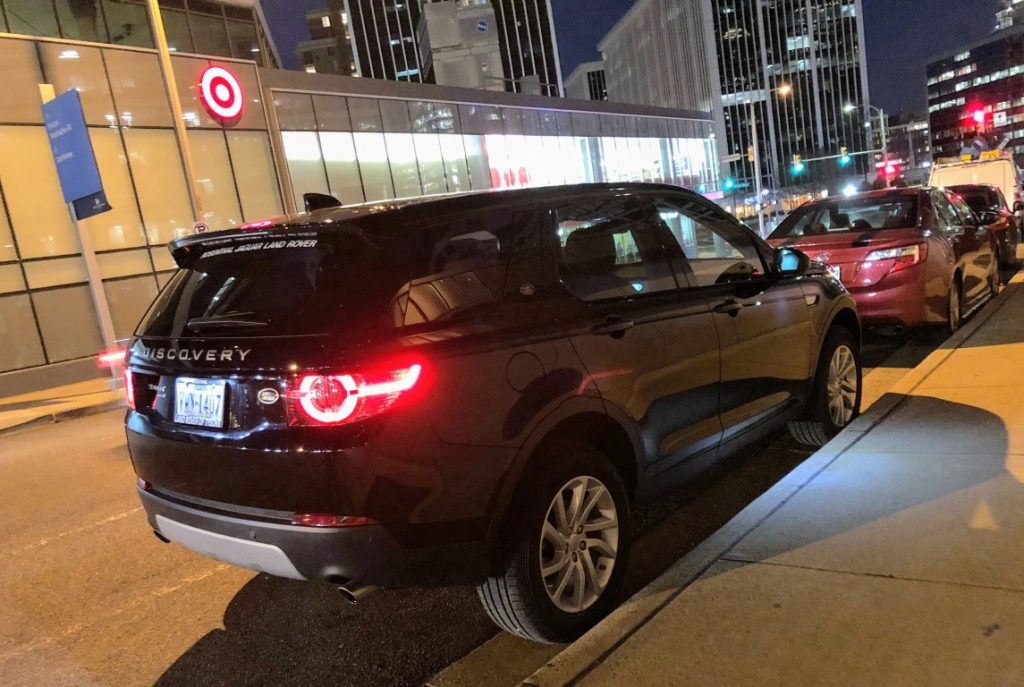