The late Chief of Instruction, Dan Unkefer, had a saying he’d frequently utter to his HPDE students in the classroom. “If you need a straight, make a straight.” We lost Dan a few years ago, but our August event at VIR is named in his memory.

All of us who have ended up with racing licenses started off in Dan’s HPDE program and taken that phrase to heart over and over.

My trip to VIR started on a good note, though traffic quickly became unbearable. College move-ins, beach travelers and the upcoming solar eclipse meant everyone felt the need to be on I-95 on Friday afternoon. Thankfully, things eased up once I got past Richmond. 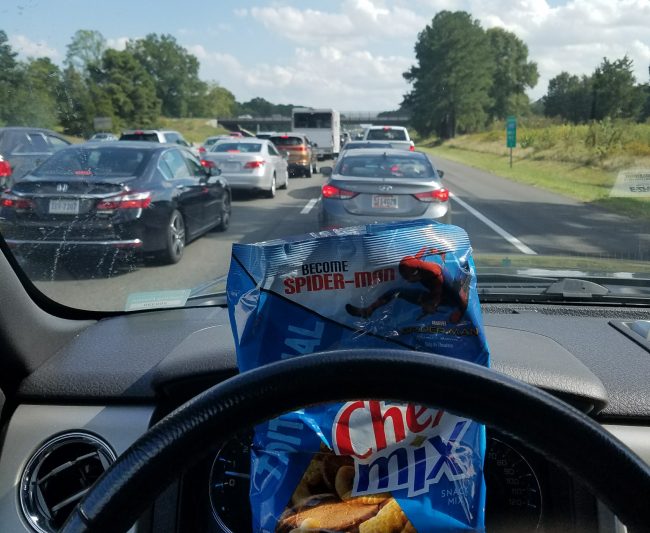 Saturday’s qualifying went well enough. I qualified somewhere mid-pack and we took the green flag for the race around 2:30 PM. I started working my way through traffic and after a few laps, caught Jason in his 323is. Right now, my torque advantage (almost 80 ft/lbs) helps me get ahead out of the turns – but he’s building a 3.1L stroker motor out of a Z3. I’ll have to step up my game once that gets installed!

After getting past Jason, I set my sights on Mark and slowly reeled him in. I was stuck to his bumper as we came out of the climbing esses, and elected to take the pass at T10. There was room to pass with enough degree of safety, although I likely wouldn’t tempt fate a second time there. “If you need a straight, make a straight” worked as I dropped my left two wheels in the grass, straddled the curb and got past Mark.

Those two passes had me in a solid 3rd place as the checkered flag waved. My competitor Luke ended up being disqualified due to being underweight for his claimed horsepower, so the field was shifted up and I left the awards party with a 2nd place trophy.

Sunday morning started off on a different note. I changed into my racing suit, hopped in the car and turned the key to head to grid. “Guhguhguhguh” from the starter, and nothing from the engine. It was cranking its heart out and not turning over. Crap.

With five minutes called on grid, I quickly checked fuel pump fuses but could not determine the problem. I took my suit off, and Tom and Taylor came by to help diagnose. I would not qualify, and would start the 12:05 race at the back of the GTS2 field.

Tom started probing his multimeter around to figure out where the break in power was. We figured out that the DME (engine computer) was not getting power, thus the fuel pump was not getting power with the ignition. It was all traced back to… my kill switch on the dash. We rewired a few things and I was ready for the race.

Heat cycles on tires is a very sensitive topic among racers. The more money you make, the fewer HCs you allow to accumulate before deeming the tires “trash” and replacing them. At $1,200 a set, that can get spendy if you have other bills to pay. I chose to run the BF Goodrich R1 this year as they are very grippy, but last quite a bit longer than the competitor Hoosier R7.

The tires had completely given it up on Sunday. They have grip left, but not enough to be competitive. I finished the race in 4th place, and added up the heat cycles once I got out of the car. I’ve put about 25 HCs on these tires! Talk about getting your money’s worth.

Phil’s Tire Service will be bringing me a new set of R1’s to Summit Point in a few weeks, and I’ll run the remainder of the season on fresh rubber. Thanks, Phil and Kim!

We’ve got a few race weekends left in the year – Summit Point in September and VIR again in early October. That’ll conclude the “normal” season, and then I’ll load up the trailer and head (very) south to Sebring International Raceway in Florida, for our East Coast Championships at the end of October. Should be an exciting way to wrap up the year.