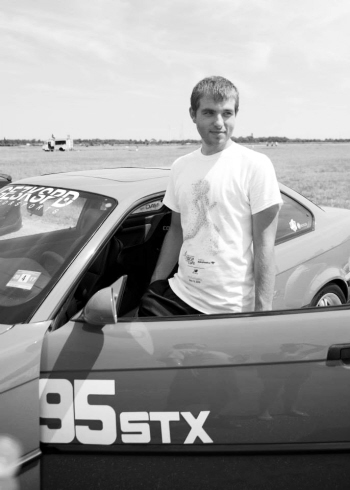 Tyler has had a passion for driving from a very early age. Around the age of 3 he was spotted drifting his Power Wheels Jeep in the neighbor’s sprinklers.

Thirteen years later Tyler ditched the Power Wheels for an E36 BMW 325is, and started participating in numerous local autocross events as a college freshman. As time went on the once-daily-driven E36 became a fully prepped STX-class autocross car, built to compete in local SCCA events. Tyler caught on quickly, winning Rookie of the Year and placing 2nd in the SCCA STX championship in 2015. He continued on to win the STX championship and tied for 2nd in the Drivers’ Championship in 2016.

While honing his cone-dodging skills, Tyler started participating in a few HPDE’s in 2015. Jake Thiewes helped introduce Tyler to his first track event at New Jersey Motorsports Park with NASA Northeast. He started the weekend in HPDE 1, and by the afternoon of the first day, Tyler progressed to HPDE 2 with the clearance to fly solo without an instructor. After an enjoyable first experience with NASA Northeast, Tyler continued to participate in more HPDEs and a few SCCA Track Night in America events.

As Tyler’s college career is coming to an end, a real career is on the horizon. That means more money for motorsports… among many other new responsibilities. As a result, the E36 has been seeing a few safety modifications to slowly prepare it for the next stage in its 263,000 mile life… NASA Time Trials.

Until that point in time, Tyler continues to participate in both the South Jersey and Philly Region STX SCCA autocross championships in the #95 STX E36 BMW.