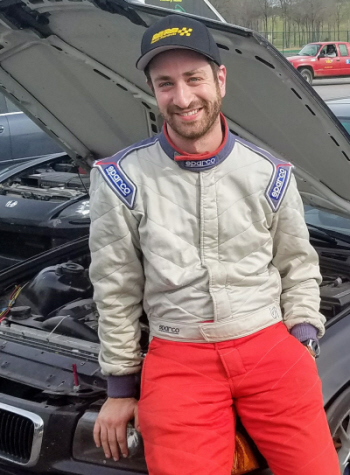 Jake got his first taste of motorsports with a visit to Summit Point Motorsports Park his freshman year of college. He had found James Madison University’s car club – Madison Motorsports – and rode up with some older students to see what this racetrack thing was all about.

After a few rides with instructors that day, he was hooked. Jake saved his pennies and returned to JMU to begin his sophomore year with a new car, a 1995 Mazda Miata.

The Miata proved a great way to get involved in autocross – an easy to maintain car and a motorsport with low costs of entry was a great combination. Jake autocrossed throughout college and began volunteering for the Mid-Atlantic region of NASA. He quickly became ingrained in the NASA community and moved from a volunteer to paid staff, working on grid and eventually, driving one of the pace cars.

Jake’s first HPDE weekend was, surprisingly, not in his own car. His Miata did not have a rollbar yet installed, but his friend Carrie was an instructor, and graciously offered the use of her car for a few weekends, until he graduated and could afford his own safety equipment. He used Carrie’s 1994 Miata for three weekends in 2010 between VIR and Summit Point.

Graduation from college brought paychecks (and bills). One of the first paychecks Jake received post-graduation was put toward a Hard Dog rollbar for his Miata. The black #20 Miata became a staple at NASA weekends as Jake worked through the HPDE program.

After two blown 1.8L engines, Jake decided it may be time for another platform that would be an easier fit for his 6’2″ frame. He drove to New Jersey and picked up a very stock 1997 BMW M3 sedan over Labor Day weekend of 2013.

More and more safety gear was slowly being added to the M3 as Jake’s lap times dropped and experience grew. After closing out a very successful 2016 with the car, he made the decision to move to wheel-to-wheel racing, and passed NASA’s Competition School in March 2017.