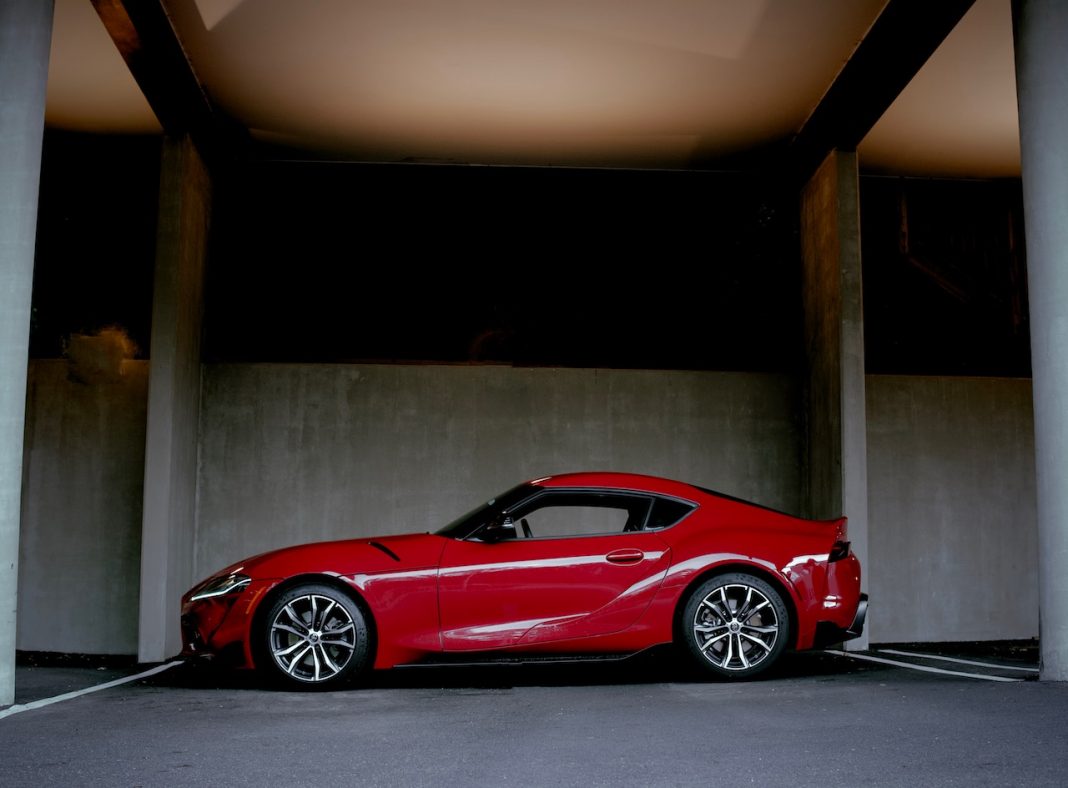 Toyota’s MkV Supra created quite a stir when it launched last year. The 2020 Supra was sold with a less-potent variant of its sister BMW Z4’s B58 inline six-cylinder. This year, Toyota has both amped up the six-cylinder Supra and created a lower-power, cheaper offering. Where the 2021 Supra 3.0 uses the “full power” version of the BMW B58 inline-six, the 2021 Toyota Supra 2.0 is powered by the Z4’s BMW B48 turbocharged four-cylinder.

The 2021 Supra 2.0 isn’t just a lower-powered offering in the Supra lineup, though. Toyota views it as the middle tier of three in their sports car lineup, sitting above the naturally-aspirated Toyota 86 and below the top-dog Supra 3.0. Price-wise, it fits comfortably. And Toyota changed a bit of equipment on the two-liter Supra, which both reduced overall curb weight and changed how the car feels on the road.

Weight savings started with that smaller two-liter turbo four, an engine sourced from BMW that produces 255 horsepower and 295 lb-ft of torque. The BMW B48 is paired to the same ZF 8-speed torque-converter automatic as in the Supra 3.0, sending power to the rear wheels. Toyota uses a less-intricate differential out back, losing the electronic controls for lockup.

More weight is saved on the 2021 Supra 2.0 thanks to smaller front brake rotors and single-piston front brake calipers (instead of four on the Supra 3.0). Wheels are downsized from 19 inches to 18 inches, with the same width of rubber. Adaptive suspension is gone, replaced by simpler fixed-rate dampers.

Inside, Toyota ditched the power-adjustable seats for a set that’s manually adjustable. Six speakers were removed from the sound system, leaving you with a basic four-speaker setup.

It all results in a “slower Supra,” but slow is relative. Sixty miles per hour still comes in about five seconds, and the Supra 2.0 retains a power to weight ratio of 12.47 pounds per horsepower.

I’m a relative fan of the current Supra. I think it looks pretty good, is pretty comfortable (except for ridiculous wind buffeting with windows down) and is generally a great performer both on the street and on the track. The Supra 3.0 is pretty fast, too, with a power to weight ratio of 8.9 pounds per horsepower and a 0 to 60 time around 3.9 seconds. It can also feel a bit heavy behind the wheel, a feeling I hadn’t realized until I drove the Supra 2.0 to compare.

Where the Supra 3.0 is a sledgehammer, the Supra 2.0 is more of a regular claw-type hammer. It can be just as effective, but you have to work more for the same effect. Yet while working more, you’re using a tool that’s more easily-controlled and placed exactly where you want.

Power-wise, I actually enjoyed the two-liter’s delivery more than the Supra 3.0 on the street. It’s more accessible, and you can slide the shifter to “M” and run through the first few gears without achieving “go to jail” speeds. The Supra 2.0’s power to weight ratio of 12.47 makes it a hair faster than a Mazda Miata, but the feeling is Miata-like. Wind it out, upshift, wind it out, upshift, here’s highway speed. Boost from the turbocharger makes it feel faster and more dramatic than a Miata can feel, but it’s the same principle. By comparison, the Supra 3.0 wants to kick the tail out around every turn taken with more than 30 percent throttle, and will rocket well above average highway speeds with the smallest dip of your right big toe.

Beyond the engine and its power delivery, the Supra 2.0’s weight-loss plan has resulted in car that is far lighter on its feet than the Supra 3.0. Yes, weight was removed from the interior, but a significant amount of curb weight was cut from the front axle forward, and you can feel it with the first sweeping curve you take. With two fewer cylinders, smaller wheels, and reduced unsprung weight on the front axle, the Supra 2.0 is lively and nimble where the Supra 3.0 is more leaden.

Though I love the power of the Supra 3.0 on the track – it was a generally fantastic companion at Virginia International Raceway – the Supra 2.0 is honestly more fun at lower speeds assuming you can plug your ears. While both Supras have an adaptive exhaust, there is just no replacement for the engine note of a good inline six.

NASA Classing is Where the 2021 Toyota Supra 2.0 Shines

This is worth mentioning, of course, because Toyota includes a one-year NASA membership as well as a single NASA track day with the purchase of any new Supra. And the natural progression from High Performance Driver Education is… competition. Time Trial is an easy step for those who don’t want to go full-on wheel-to-wheel racing, but want to compete against the clock for best lap time. If you are purchasing a 2021 Supra with more than just that one free NASA track day in mind, consider your engine choice carefully.

There is an element of rowdiness to the Supra 3.0 that the Supra 2.0 lacks. It won’t prod you to power-slide through every corner with a heavy *thwop* of your right foot. It doesn’t make quite the right noises – there’s only so much you can do with a four-cylinder. The 2021 Toyota Supra 2.0 is more composed, but a bit more athletic. It’s tossable where the faster car is driftable. It’s less powerful, but there is a joy that comes from working for the power instead of it being handed to you.