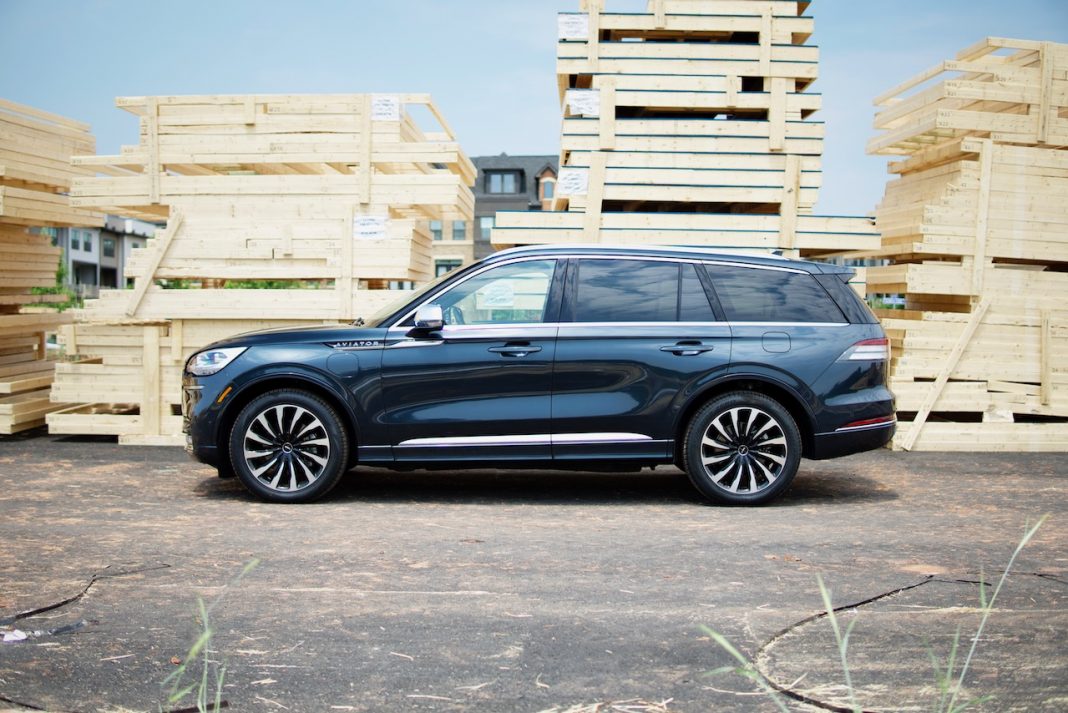 I’m currently sitting in my bay window on a dreary, rainy day – the kind of day where you just want to feel a bit coddled. If I were going anywhere, I wouldn’t grab the keys to some loud, low, raucous sports car. Days like this make even the most hardcore driving enthusiast appreciate something a bit more… calm. Luxury cars have largely drifted away from this idea of isolation, calmness, and literal smoothness, trying to combine excessive lux with an edge of European sportiness, because that’s apparently what the kids want now. Yet standing on its own is the 2021 Lincoln Aviator, a three-row crossover that steps on the notion of “sporty” and snubs it out under its shoe like a half-smoked cigarette.

Save for that one song by Commander Cody and His Lost Planet Airmen, Lincoln has never really been synonymous with ideas of “fast” or “fun.” And in decades past, they’ve been somewhat obviously contented Fords, adding brightwork and leather but retaining the same switchgear and door chimes in the Town Car as in the Crown Victoria Police Interceptor.

Lincoln has shifted that fancy-Ford narrative in recent years, and I think the Aviator may be their best showing yet. Starting with the Navigator, Lincoln pushed harder than ever to separate themselves aesthetically and otherwise from their corporate counterpart. And it’s worked out – the current lineup of Corsair, Nautilus, Aviator, and Navigator all stick to the thesis statement of “luxury above all else” while retaining a unique sense of self, all the way down to the door chimes performed by the Detroit Symphony Orchestra.

This is a 2021 Lincoln Aviator Black Label Grand Touring. Black Label is Lincoln’s top-tier trim on all vehicles, and offers unique paint and interior colorways, as well as four years or 50,000 miles of pickup and delivery for services, a premium maintenance plan, and access to the Avis President’s Club for any vehicle rentals you’d need while traveling. Grand Touring is the top trim level otherwise, and includes a healthy list of standard equipment with minimal extra-cost options to select.

The Aviator itself shares a platform with the 2021 Ford Explorer, though you’ll not notice much alike between the two vehicles. Said platform starts life as a rear-wheel drive chassis, with optional all-wheel drive. Drivetrains are shared with the Explorer, to a point. Lincoln’s “base” drivetrain in the 2021 Aviator is a twin-turbocharged 3.0 liter V6 producing 400 horsepower and 415 lb-ft of torque, paired to the corporate 10-speed automatic transmission.

Where Lincoln deviates, though, is in the addition of a plug-in hybrid offering. My 2021 Lincoln Aviator Black Label Grand Touring was so equipped, adding a 101 horsepower electric motor between the twin-turbo V6 and the 10-speed automatic. Given the electric motor is ahead of the transmission, it can use all ten gears to multiply its 221 lb-ft of torque, running on electric power alone for up to 21 miles. The plug-in hybrid drivetrain is standard on both Grand Touring and Black Label Grand Touring models, and total power output is 494 horsepower and 630 lb-ft of torque.

Lincoln didn’t skimp on equipment past the plug-in powertrain, either. Given my Black Label Grand Touring included most everything as standard, notable equipment included 30-way adjustable front seats, a 28-speaker Revel Ultima sound system, and adaptive “Air Glide” suspension. LED headlights move every which way to light your path, a heads-up display keeps your eyes on the road, and the Aviator will of course help you stay centered in your lane and a proper distance from the car ahead with its driver assistance technology, dubbed CoPilot 360.

Wafting Around, aka “the Driving Experience”

Commander Cody was foreshadowing a bit – the 2021 Lincoln Aviator in plug-in hybrid form is very clearly a modern-day Hot Rod Lincoln. Although the electrified bits add 811 pounds to the Aviator’s curb weight (the plug-in model is 5,673 pounds compared to the gas-only models at 4,862), the Aviator PHEV is still good for a 5.5 second run to 60 miles per hour.

But outright speed isn’t really the point of the Aviator. At no time during my week-long loan was I encouraged to really stand on the throttle. Nor was I encouraged by the adaptive suspension to chuck the Aviator into a sweeping off-ramp as hard as possible. So with 630 lb-ft on tap and a suspension that reads the road 500 times per second… why did I prefer to waft around?

The aura that Lincoln has crafted with the 2021 Aviator is so focused that it presents all this excess capability – the torque, the horsepower, the handling – as luxury-via-excess. It’s all there, but you’re really going to care more about the serenity of your drive. And that’s where the Aviator succeeds in some ways and falls flat in others.

I found the Aviator best experienced in its full-electric mode. The silent operation was more luxurious than adding the twin-turbo six to the mix – a noise that wasn’t unpleasant, but was there regardless. 221 lb-ft from the electric motor isn’t a ton to move nearly 5,700 pounds plus people, but it was more than enough even with four adults on board. I was truly disappointed every time the gas engine kicked on and the tach jumped up from zero, and it happened often enough due to the 21 mile EV range.

Transitions from electric to hybrid operation were seamless much of the time, though some occasional roughness presented itself in the form of engine engagement and transmission shift harshness. The brake pedal was oddly firm in electric-only driving, offering more feedback with the V6 running. I never quite mastered how much pedal engagement I needed to smoothly stop the Aviator.

Those 30-way seats were intimidating at first, and took some time to really get adjusted properly. Once I had my individual thigh bolsters, three lumbars, hip bolsters, torso bolsters, two backrest adjustments, heating, ventilation, and massage settings all figured out, they were tremendously comfortable. Second row captains’ chairs, also heated and ventilated, provided plenty of leg room and overall comfort for passengers, though some felt the seats were a bit narrow.

Revel, an audio brand mostly known for home theater audio, has provided a 28-speaker system for the higher-trim Aviators. It uses a 20-channel amplifier and has all sorts of fancy software to make the most of your music, including two surround-sound settings and “Clari-Fi” to bring some depth back to overly-compressed music, like what you stream from Spotify. Music source is its own topic, but suffice it to say this Revel Ultima system sounds pretty good normally, and incredible if you feed it proper, uncompressed music over USB instead of lower-quality Bluetooth.

I ended up road-tripping the 2021 Lincoln Aviator, and between the seats, sound system, and driver assistance technology, it was a delightful partner. Fuel economy was good for something this big, averaging nearly 33 miles per gallon in highway cruising.

Towing With the 2021 Lincoln Aviator

I’ll let you in on something – I’d initially planned on towing with the Aviator. Somehow, Lincoln has managed to extract 1,100 pounds more tow capacity from the Aviator than Ford has with the same-platform Explorer. Properly equipped with just the 3.0 liter twin-turbo EcoBoost V6, the Aviator is rated to tow 6,700 pounds. The same drivetrain in the 2021 Explorer is rated for just 5,600 pounds.

Being a plug-in hybrid, my Aviator wouldn’t have been rated for the higher 6,700 pound figure – Aviator hybrids share the Explorer’s 5600 pound rating. But I would’ve still towed something, a car on an open trailer comes in around 5,000 and is a perfect test for something like the Aviator and its long-for-an-SUV 119.1 inch wheelbase.

And yet, the $89,430 fully-whizbanged-loaded-up Aviator Black Label Grand Touring I received didn’t have a hitch installed. It’s a separate line item on the build-and-price tool, and costs just $500. While I understand not every customer will want or need a hitch on their Aviator, I’m also surprised to see it not included in some package as you move up in chosen trim level.

In any case, 6,700 pounds with a 670 pound tongue weight limit is fairly substantial. Hopefully we can source another Aviator properly equipped to test it out in the future.

While the plug-in hybrid drivetrain was a delight in full-electric mode, I’d prefer to see some details better sorted and a longer electric-only range before pulling the trigger. Given the higher tow rating of the gas-only variant, I’d personally save a bit of money and stick with the gas-only drivetrain.

There’s not a single sporting pretense about the 2021 Lincoln Aviator, and yet as it was driven away after a week in my hands, I found myself quite sad to see it go. It is rare that a brand capitalizes so well on one single ethos, and my enjoyment came from the fact that Lincoln wasn’t trying to be anything else but very, very nice. And save for some quibbles – nothing is perfect, after all – they’ve executed on their thesis, and brilliantly.