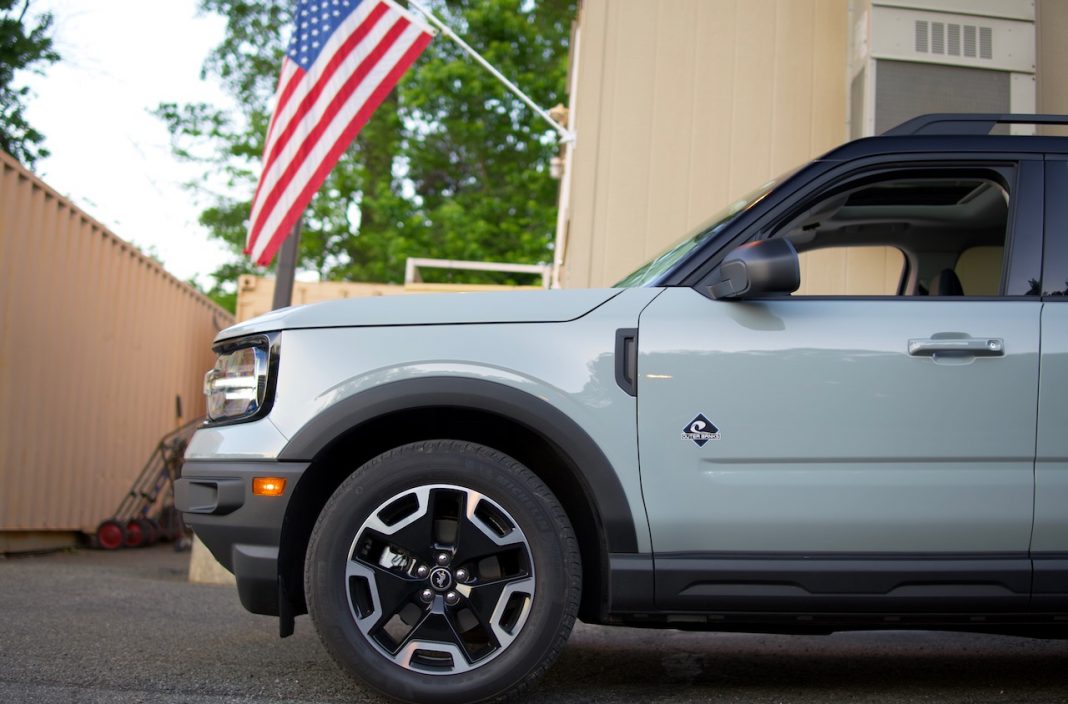 I learned to drive on a 2001 Ford Escape, starting with some parking practice in my middle school’s parking lot and eventually taking the small-but-mighty SUV off to college. Our Escape XLT was fully-loaded, with Ford’s Duratec 3.0 liter, 200 horsepower V6 and all-wheel drive with a lockable center differential. My parents and I all loved the chunky, rugged styling and durable-yet-nice-enough interior. We kept ours on the pavement for most of its life with us, but liked the “soft-roading” capabilities it had. The Escape has evolved and become more street-focused in recent years – and as Ford brings back the body-on-frame Bronco SUV, they’ve also created a smaller, softer variant, the 2021 Ford Bronco Sport.

While the Bronco Sport is part of Ford’s “Bronco family,” it’s using a modified version of the “C2” platform that underpins the Ford Escape and Lincoln Corsair. And where the Escape looks guppy-esque, the Bronco Sport has straightened every body line and added a stepped “safari roof” for backseat passengers, ready to take on the tarmac and much of what’s found beyond it. Ford offers several trim levels of Bronco Sport, depending if your use will be more on-road or off.

This is a 2021 Ford Bronco Sport Outer Banks, the highest-equipped street-focused Bronco Sport. For those looking to leave pavement more often, Ford will sell you a Bronco Sport Badlands, which offers some very real hardware differences that add capability.

Every Bronco Sport except the Badlands is powered by Ford’s 1.5 liter EcoBoost turbocharged three-cylinder engine, which produces 181 horsepower and 190 lb-ft of torque. The turbo three sends what power it has through an eight-speed automatic transmission and standard all-wheel drive.

Ford gives you multiple drive modes, which they call “GOAT Modes” – referencing a cheeky “Goes Over Any Terrain” marketing phrase from the Bronco’s early days, some 60 years ago. Every Bronco Sport gets GOAT Modes, but Badlands gets a few more options around that drive mode selector. Ford has also coined the term “HOSS” for the Bronco Sport’s suspension. The “High Performance Off-Road Stability Suspension” moniker is cute, but given the term applies whether you have the more basic Bronco Sport or the higher-riding Bronco Sport Badlands, it’s unclear what it really means.

My Bronco Sport Outer Banks was painted Cactus Gray, a delightful shade of greenish-blueish-grayish, paired to Navy Pier blue-and-gray seats. I really admire Ford offering some fantastic color choices on the Bronco Sport, both inside and out.

Most buyers will be plenty happy with the Bronco Sport Outer Banks, or its lesser-equipped siblings, Base and Big Bend. Even the most basic Bronco Sport has 7.9 inches of ground clearance and can go through 17 inches of standing water – two capabilities that’ll go largely unused by owners who stick to asphalt and some light dirt or gravel trails on the way to a campground or winery. The all-wheel drive system is capable enough, the highway tires are grippy enough, it’ll all get you fairly far.

It’ll take its sweet time getting there, though. The Bronco Sport Outer Banks (and Base, and Big Bend) have to haul around over 19 pounds per horsepower, before you sit down inside or throw anything in the rubber-lined cargo hold. While the 8.6-second stroll to 60 miles per hour is acceptable, the turbo three has to put in some real work to get you there. It’s not outright bad, nor is it “dangerously slow,” but I was left wanting more. Modern cars have become pretty quick overall, and driving something with a 19.15 pounds-per-horsepower ratio in 2021 ends up feeling “just enough” at best.

This is ironic, of course, as Car & Driver tested a 2001 Ford Escape XLT with its then-punchy 3.0 liter V6, and recorded an 8.8-second run to 60 miles per hour. That felt kinda quick at the time, but I was also seventeen.

I liken the non-Badlands Bronco Sports to the first-generation Escape XLS with its 123 horsepower Zetec four-cylinder. It was all well done, packaged smartly, and capable enough, but relatively pokey in a straight line. (When I had my ’01 V6, a friend had an ’01 four-cylinder… with a manual! It was pokey.) Many drivers won’t notice or care about the relative lack of power, but those of us in the enthusiast realm will be disappointed. Regardless, the Bronco Sport is still full of personality and charm.

And speaking of smart packaging, the little Bronco Sport rides on the Escape’s platform but is dimensionally different in just about every way. The wheelbase is actually shorter, yet interior packaging is smartly executed. Don’t delude yourself, the Bronco Sport is still a “subcompact” crossover – but Ford’s done what they can to keep everyone comfortable. Front seats are adjustable to a comfortable driving position for short and tall drivers alike, helped by a tilt-and-telescope steering column. Rear seat headroom is excellent for six-footers, given that “safari roof” that steps up over the rear bench and cargo area. Rear seat entry is tight, though, and rear leg room is adequate but not generous if you are tall.

For Punch and Prowess, Get the Bronco Sport Badlands

I haven’t driven the Bronco Sport Badlands yet, but it’s different enough that I can imagine its personality being more akin to our old Escape XLT with that Duratec V6. Our Escape felt just a hair too fast for its own good, with a power to weight ratio similar to the modern Bronco Sport Badlands.

The Badlands isn’t using a big six cylinder – it’s 2021, come on now – instead using the 2.0 liter turbocharged four cylinder in Ford’s EcoBoost family. Though the Bronco Sport Badlands weighs 240 pounds more than the other trim levels, the 250 horsepower and 277 lb-ft help reduce that oft-overlooked power-to-weight figure from 19.15 pounds per horsepower down to just 14.8 pounds per horsepower. That’s not outright fast these days, but absolutely in the “huh, this is quick” realm.

Bronco Sport Badlands also adds a twin-clutch “rear drive unit” – think rear differential, more or less – that can shoot most of the engine’s power to one of the rear wheels as needed. Those GOAT Modes are augmented by the ability to lock in a 50/50 power split, front to rear, while also locking the rear drive unit left-to-right.

Ford gives the Bronco Sport Badlands nearly a full inch of extra ride height, at 8.8 inches. More impressively, they claim the Badlands can go through 23.6 inches of water – a 6.6 inch difference over the Outer Banks. Skid plates, all-terrain tires, and recovery hooks round out the Badlands trim.

The original Escape was on a shared platform (with the then-Ford-owned Mazda 626), with engines and transmissions and steering wheels and radios and the like all sourced from other Fords. But it was so much more than the sum of its parts; it all worked well to become an endearing, capable crossover that won the hearts of owners.

Twenty years later, the Bronco Sport comes across in the same vein. Save for the Badlands variant, most Bronco Sports are a unique take on existing Ford bits, but you’ll find the Bronco Sport more personable than the Escape on which it’s kinda-sorta-based. I’m pleased to see a lack of soft-touch materials everywhere, with a focus on easy-to-clean plastics and vinyls. And the bottle opener bolted near the rear hatch strut is a handy nod to campers who want to pop open a cold one after a long day of hiking.

I’d handily prefer the Bronco Sport Badlands, though, to this Outer Banks trim. Even having not driven one, the Badlands seems to more wholly embody Ford’s vision for the “big Bronco’s” little brother. The Outer Banks didn’t inspire me to plan a day of off-roading, even though I know I could probably coax those highway tires through Peters Mill Run as we did a Chrysler Town & Country AWD two summers ago.

The 2021 Bronco Sport is a great size for folks who want some of the off-road abilities that the Bronco name provides, but don’t need or desire the more capable and rugged full-size Bronco. Which trim level is appropriate for you, though, is all in how you’ll use it.