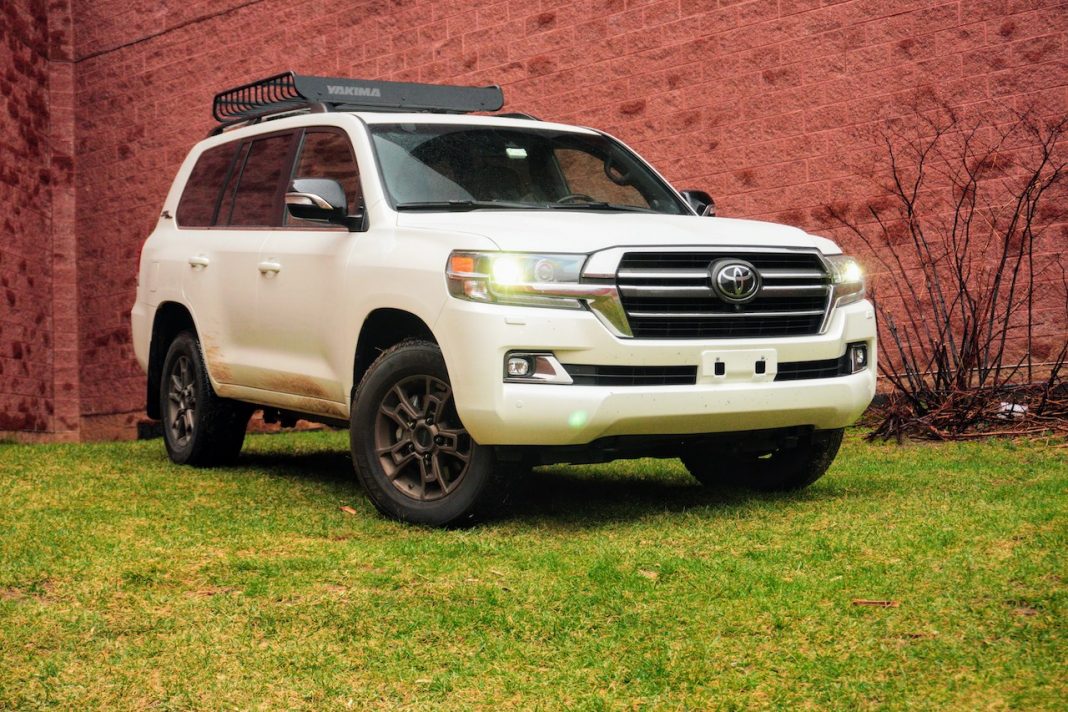 Say the words “Land Cruiser” to nearly anyone, and their mind will immediately conjure up images of overlanding and off-roading in one of the most capable and durable sport-utility vehicles of all time. Mention the 2021 Land Cruiser’s 8,100 pound towing capacity, and you’ll be met with a confused look and a “really, it’ll pull that much?” sort of question.

In researching the final model year of Toyota’s 200-series Land Cruiser, I was equally surprised. Sure, the Land Cruiser is a body-on-frame SUV with a big V8, but the soft suspension and short wheelbase – both ideal for off-roading – must make it a wallowy mess with a heavy enclosed trailer. To see if that was the case, Toyota sent over a 2021 Land Cruiser Heritage Edition for the week. Within thirty minutes of taking delivery, I had my enclosed trailer secured to the hitch and set off on a five-hour tow to Virginia International Raceway.

This is a 2021 Toyota Land Cruiser Heritage Edition. 2021 is the final model year for the “200-series” Land Cruiser, which has been on sale since 2008, and Toyota claims it’s the last Land Cruiser we’ll get in the United States. Consumer tastes here don’t seem to value the idea of “durability as luxury,” and the big Toyota has suffered in sales figures compared to the larger, cheaper, more family-friendly Sequoia – which can tow nearly as much, anyway.

The “Heritage Edition” is a visual package that looks pretty good – bronze BBS wheels, a unique front grille treatment, and vintage-y badging on the C-pillar. It also includes a Yakima roof rack that looks neat but brings the truck’s overall height to a barely-fits-in-parking-garages levels, over seven feet tall.

Every 2021 Land Cruiser is powered by Toyota’s ubiquitous 5.7 liter V8, producing 381 horsepower and 401 lb-ft of torque. Unlike other Toyota trucks with this engine – Tundra and Sequoia – the Land Cruiser gets an 8-speed automatic, two more gears than the others. Power is routed to a full-time four-wheel drive system with low range and all sorts of off-road technology that I didn’t use.

Toyota includes a standard “Trailer Tow package,” which isn’t super comprehensive beyond an engine oil cooler, brake controller wiring under the dashboard, and the hitch out back. No trailer brake controller is available as a built-in unit, you’ll either wire up an aftermarket controller or use something in-line, like my Tekonsha Prodigy RF.

Hooking Up a Trailer

Trailer hook-up is generally a non-event, but just as with the Land Cruiser’s sister Lexus LX 570, I had to break out a flathead screwdriver to expose the trailer hitch. Toyota is one of several manufacturers who hide their hitch behind a painted, plastic body panel. It provides a cleaner look when not towing, though where others exclusively use finger-friendly tabs to secure the panel, Toyota uses a push-in plastic fastener. I had to break out the flathead screwdriver from the included toolkit to remove the fastener. While it was easy (ish) I wondered how quickly I’d either break or lose the fastener if I owned this Land Cruiser personally.

Once exposing the hitch, hook-up was simple. There’s not much room for the hitch pin, so if you use a locking pin (as I do), be prepared for some trial-and-error while you figure out how to make it fit. Given the weight of my trailer, I did add weight distribution once I loaded the BMW in the trailer a few hours into my journey.

Toyota – as with Lexus – has kept the seven-pin trailer wiring connector located to the right rear of the Land Cruiser, tucked up at an angle. This helps prevent damage to the connector while off-roading, but can be difficult to locate unless you crouch or lay on the ground.

Towing an Enclosed Trailer – Can the 2021 Land Cruiser Do It?

Before hooking up, I poked my head into the driver’s door jamb to check the payload sticker. Toyota rated my particular Land Cruiser at roughly 1,320 pounds of payload – remember, that number has to cover the driver and any passengers, all your things, and the trailer’s tongue weight. My enclosed trailer is aluminum, and with my BMW M3 inside, weighs in between 6,500 and 7,000 pounds. Using a conservative estimate, I assumed 700 pounds of tongue weight, which left about 190 pounds of payload after I slid behind the wheel. So, I could have brought a passenger or a set of wheels and tires with me in the Land Cruiser, but not both.

Once on the move, I was surprised (pleasantly, mostly) by the Land Cruiser’s towing behavior. The short 112.2″ wheelbase and soft suspension did allow the truck to get pushed around a bit, though less than I’d expected. A steady hand on the wheel is all it took to keep straight, but more focus was required in those moments compared to, say, a Tundra. Large flatbed trucks produced the worst “wind wake” effect that affected the Land Cruiser; eighteen-wheelers didn’t faze it as much.

Transmission gearing with that unique-to-Land-Cruiser (for now) eight-speed automatic was less than ideal. Toyota doesn’t provide a Tow/Haul mode, and even when I kept the transmission in “Sport” and “ECT Power” modes, it still wanted to upshift early out of first, which was followed by a too-long second gear. Highway acceleration was similarly lackluster, with the transmission refusing to downshift unless the throttle was nearly floored. Other tow vehicles have smarter transmission logic that better uses similar power and torque figures. The Land Cruiser’s brakes, while touchy unloaded around town, provided plenty of easily-modulated stopping power, paired to my trailer brakes controlled by the Prodigy RF.

Fuel economy was on par with other gasoline V8-powered tow vehicles I’ve tested, somewhere between 9 and 10 miles per gallon with my (boxy, aerodynamically-poor) trailer attached. Where the Land Cruiser let me down was tank size. At 24.6 gallons, I had to stop for fuel every 200 miles. This is not an issue most would face, as unloaded the Land Cruiser is rated at 17 MPG, and should achieve 14ish with an open trailer.

So yes, the 2021 Land Cruiser can tow an enclosed trailer in a pinch. Would I recommend it for routine trips with an enclosed on the hitch? Probably not. Toyota’s own Sequoia is far less costly and handles the aerodynamics of an enclosed trailer with substantially more grace. If you have an open trailer, though – go for it.

Toyota discontinuing the Land Cruiser in the United States is a bummer. There’s this very subtle sort of sex appeal to the Land Cruiser, an appeal that fits the weekend-adventurer image that many strive for and some actually embody. Unfortunately, though, Americans have decided that at price points closer to $100,000 than $50,000, they want “luxury” to mean something beyond longevity. They want “luxury” to be synonymous with an excess of technology and horsepower. And that leaves the Land Cruiser to sell a few thousand units per year, which just isn’t enough for any company making decisions based on data instead of feelings.

In the meantime, if you’re someone who wants to bring home a final-year Land Cruiser Heritage Edition, head over to a Toyota dealership. We’ve all known how well the 200-series does off-road, and should you need to tow with yours, it’ll do a decent job of that, too.