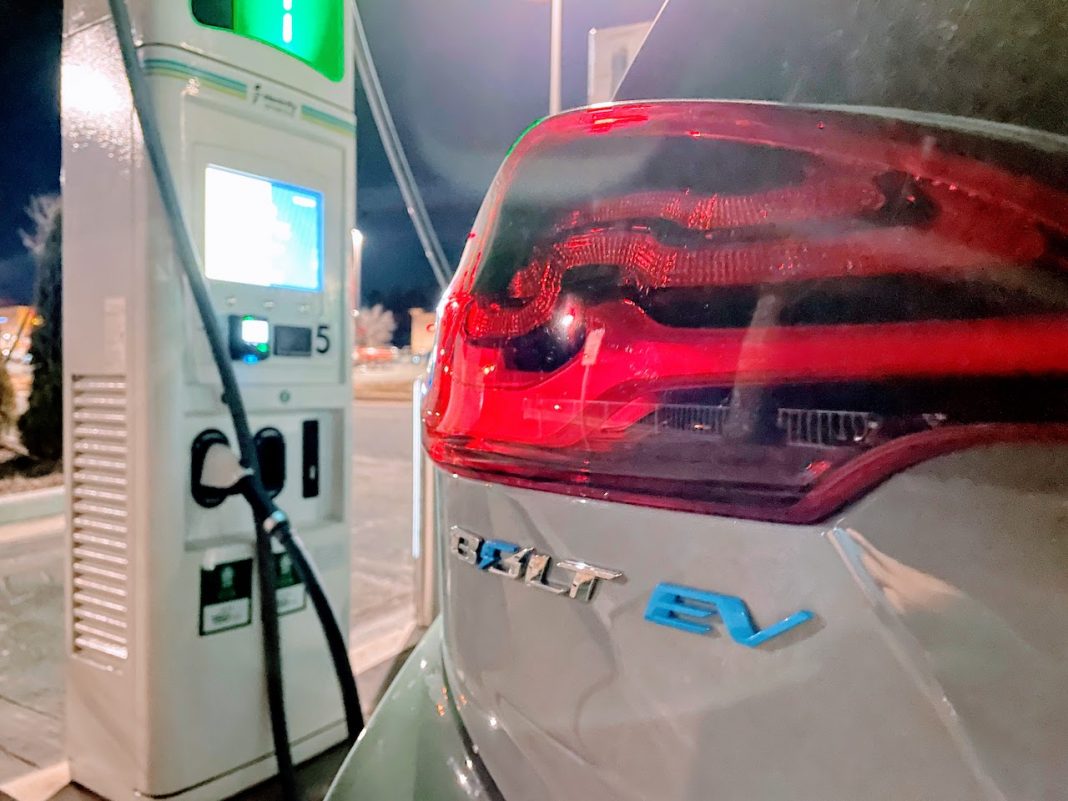 There seem to be two vocal camps of automotive enthusiasts when it comes to electric cars. One group thinks they’re the absolute devil, refusing to see them as anything but soulless transportation for the masses. The other flips to the opposite extreme, declaring ICE (internal combustion engines) cars as disgusting relics. Then you’ve got me, and many others, somewhere in the middle. EVs are beneficial in many ways, but until recently, I had some personal doubts about their fun factor and realistic road-trip abilities. Chevrolet sent me a 2020 Bolt EV to see if they could clear up my thoughts.

Yes, the 2020 Chevy Bolt is seemingly “old” as many new cars we’ve reviewed have been 2021 models. It feels doubly “old” given the 2022 Chevy Bolt and Bolt EUV have been announced. Make no mistake, though, I drove a new car that can be bought today at dealerships with zero miles on the odometer as a 2020 model year car.

This is a 2020 Chevy Bolt. It’s a fully-electric hatchback that’s been around since the 2017 model year, and sits as a somewhat “entry-level” electric car among the offerings from so many brands. All Bolts are powered by an electric motor that drives the front wheels, producing 200 horsepower and 266 lb-ft of torque. That output reaches the front wheels through a zero-speed, uh… gearbox? Transmission? Whatever, it’s got two pedals on the floor and a “monostable” shifter with options like Park, Reverse, and Drive.

Charging speed is a two-part dance that’s determined both by your charger and the Bolt. Assuming the charger can output enough power (a la DC Fast Charging you’d find along highways and in other public spaces), the Bolt can add 100 miles of range in 30 minutes, according to Chevrolet. There is a big asterisk there, which we’ll get to later. In more typical use on a home outlet, the Bolt can add four miles of range per hour on a standard 120V household outlet, or 25 miles of range per hour on a 240V “dryer outlet” that can be installed in your garage, paired to a suitable Level 2 charger.

What About the Newly-Announced 2022 Chevy Bolt?

So Chevrolet has announced an updated 2022 Bolt, which is ultimately a heavy refresh of the “outgoing” model. Realistically, they’ve changed the bumpers and interior but retained the same electric drive unit, battery, and charging hardware. Keeping that in mind – range doesn’t increase, charging speed stays the same, power and torque are the same – if you prefer the styling of the 2020 and 2021 Bolt, there are deals to be had. Chevy announced a $5,000 base price reduction for the upcoming 2022 Bolt, which means dealerships have to offer big incentives to move the older-but-kinda-the-same-brand-new Bolts now.

I deliberately threw a wrench in this review by scheduling the Bolt and immediately planning a road trip to visit my parents. They live approximately 135 miles from me, and between us, we don’t have any Level 2-esque charging at our homes. I had to juice up the Bolt before I left, and would have to charge at their place… somehow.

My pre-trip charge took place at a nearby Electrify America station, which is in the parking lot of a Target a few miles from my apartment. I had shopping to do, so it was convenient enough. I took Chevy at their word of “100 miles in 30 minutes” and plugged the car in to accept a DC Fast Charge from the station.

This particular Electrify America station can shove power into an EV at speeds up to 150 kilowatts, but the car must be able to ingest juice at that rate. The Bolt cannot charge that quickly, and its fastest charge rate is 55 kW. The 55kW rate is what Chevrolet uses to make the bold claim of 100-per-30. Unfortunately, I arrived at the station with the Bolt’s battery already at a 50% charge. As it turns out, once the battery is roughly half full, the Bolt slows the charging rate to about 30-35 kW and holds that slower-but-fastish speed until about 80% state of charge. From 80% to 100%, as with most EVs, it’ll charge even slower.

So, my “quick charge-while-shopping” trip involved a lengthy tour of the candle aisle as I killed 52 minutes at Target. That got me to 80% state of charge, which was enough for my trip and left a healthy margin for error. I felt comfortable, as there are no chargers for most of the route I was taking.

The road trip took place on a chilly enough day, with highs in the mid-40s (°F). I drove with the speed limits and flow of traffic, and didn’t change any behaviors to eke extra range from the Bolt. I played music, ran the climate control (which, confusingly, doesn’t turn on the heat in Auto mode) and otherwise just drove the car. Starting from 80%, I saw about 170 miles of range on the “Guess-o-Meter” gauge, which shows your current estimated range to empty, alongside a theoretical maximum and minimum given how you’re driving and using the car. Napkin math indicates a full battery would have allowed about 212 miles of driving, about 18% less than what GM says the Bolt will do in ideal conditions.

At my parents’ place, I used the included “travel charger” to plug in to a standard household outlet in their garage. Though four miles per hour of charging sounds excruciating, it does add some useful range if you arrive at dinnertime and don’t go anywhere until mid-morning the following day. We did stop at the only DCFC station in town, at their local convention center. It was a very generic unit in appearance, but charged at the same rates I got from the Electrify America station near me. After an hour of charging, I had enough juice to return home the following day.

Realistically, the Bolt’s “fast charging” speeds are just not up to par given how quickly almost every other EV can accept electrons, even if their batteries are above 50% charged when you start. Taking a longer trip in a Bolt that involved multiple fast-charge stops would feel painful, unless you were able to run the car down nearly to empty before plugging back in.

Driving the 2020 Chevy Bolt as an Enthusiast

Beyond the charging experience, the Chevy Bolt is oddly amusing to drive. Electric motors make all of their torque from zero RPM, which means you have 266 lb-ft available immediately. With traction control enabled, you can hear the front tires scrabbling for grip as you floor the throttle away from a stop sign. With it defeated and “Sport mode” turned on, the Bolt will lay a mean one-wheel peel.

Take that funky shifter and put the not-transmission in L, not D. You’ll enable one-pedal driving that way, which I suppose Chevy is calling “Low gear” even though it’s not really a gear at all. In L, you won’t use the actual brake pedal in nearly every type of driving. Lift your foot partially or fully off the throttle and the Bolt will re-capture some of your forward (kinetic) energy, dump it into the battery, and slow the car as a result. If you need extra-super-regenerative braking, pull the paddle on the left side of the steering wheel. It’s super simple to master and you can stop the Bolt from highway speeds with no actual “braking” input required.

Weight-wise, the Bolt is not super-svelte for a small hatch, coming in around 3,560 pounds – a similar-size Volkswagen GTI weighs about 300 pounds less. However, nearly 1,000 pounds of Bolt is in the floor, thanks to the batteries. Helloooo, low center of gravity. Despite the weight, the Bolt is pretty tossable and almost begs to be thrown through every low-speed, tight corner you encounter.

The 2020 and 2021 Chevy Bolt are not perfect EVs. Charging speed is too slow and though some interior bits are fine-to-good, others are lacking. Namely, the seats. I’m still not entirely sure how to consistently use the heater. Chevy has addressed the interior complaints (and presumably, HVAC controls) with their 2022 Bolt, though I’m a bit bummed to see the EV bits remain the same. It’ll keep the Bolt as a city and commuter car above all else.

Practicality aside, though, I really want to throw a big rear sway bar on a Bolt (or pump up the rear tire pressures) and take it autocrossing. Paddle-activated regenerative braking and insta-torque both feel perfect for hustling through some cones.