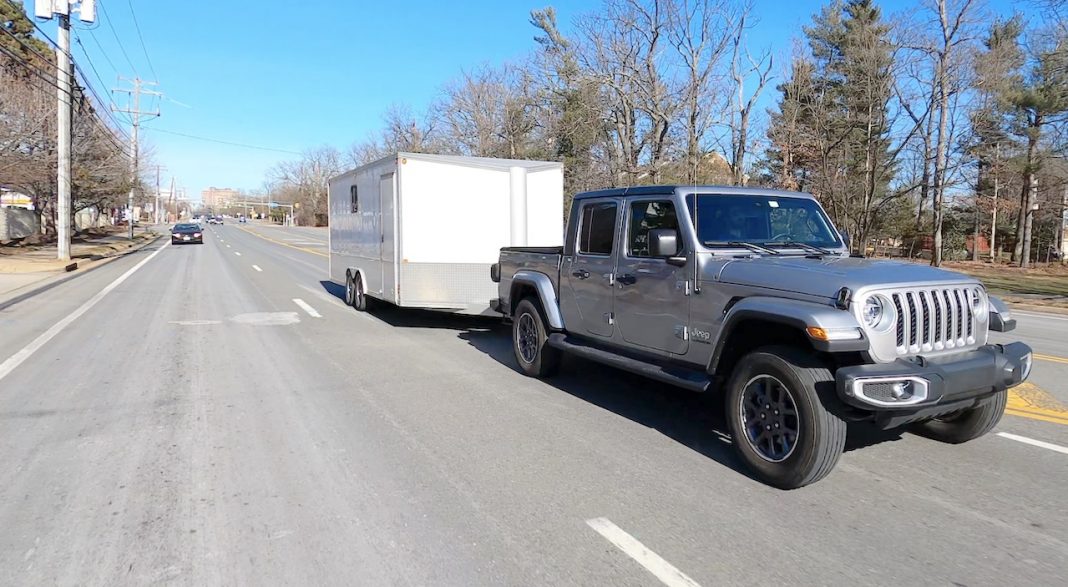 “You don’t need to bother towing with that thing, Motor Trend already did it for you and said it was awful.” The comment from one Facebook user rang out in my head as I pointed the 2021 Jeep Gladiator west, toward my trailer’s storage lot. I’d been excited as all get-out to spend a week with what was, effectively, a “dream truck” given my love for convertibles and need to own “a thing that tows well.” Now, as the EcoDiesel V6 lightly clattered away, pushing me down I-66, I felt a bit of worry cloud my excitement.

I firmly believe there aren’t enough outlets that actually drop trailers on hitches as part of truck and SUV reviews, and that’s why we make a point of towing with everything we can. Real-world experience goes a long way for the track-day hero who needs a tow vehicle, as dealerships almost never let you attach a trailer for a test drive. Motor Trend’s damning article on the Jeep Gladiator’s towing behavior featured a 23’ Airstream camper, which was similar enough to my 20’ enclosed trailer to cause concern. Motor Trend also neglected to use a weight distributing hitch, and featured a camper with axles positioned dead-center on the frame. It wasn’t the end-all, be-all of towing tests, but still… it was a data point.

Regardless, I figured I’d start off slowly and ratchet up my speed. If the 2021 Gladiator EcoDiesel was overburdened, I would try to find out somewhere south of 70 miles per hour. Spoiler alert – it all worked out.

This is a 2021 Jeep Gladiator, the first Jeep pickup truck sold since the ‘90s Comanche, which was based on the kinda-unibody XJ Cherokee. First sold in 2019 as a 2020 model, the Jeep Gladiator is a body-on-frame truck that answers the question, “what if we made a four-door Wrangler… longer?”

To make the Wrangler into a pickup, Jeep added 19 inches of wheelbase to a four-door “JK” Wrangler, bringing its 137.3” within spitting distance of a Ram 1500. Jeep also borrowed a few suspension components from the Ram, utilizing the bigger truck’s upper and lower control arms as well as its track bar. Also known as a Panhard rod, the track bar helps stabilize the rear axle, so it only moves in directions intended by engineers.

Beyond the lengthened frame and updated bits underneath, the Gladiator is basically all-Wrangler otherwise. If you’ve been in a current-generation Wrangler, you’ll feel right at home in a Gladiator.

My particular Gladiator was an Overland trim – the top “street spec” compared to the beefiest off-road model, the Rubicon. It also featured the EcoDiesel 3.0 liter V6 engine. While most Gladiators are sold with the standard 3.6 liter Pentastar gas-powered V6, the EcoDiesel adds another option for those who want low-end torque instead of the Pentastar’s high-revving nature. The Gladiator EcoDiesel produces 260 horsepower (down 20 from the Pentastar) but 442 lb-ft of torque, starting at just 1400 rpm.

Every Gladiator EcoDiesel sends power through an eight-speed automatic, down to Dana 44 axles with 3.73 ratios, spun by standard four-wheel drive.

My Gladiator Overland was equipped with every conceivable feature, bringing the MSRP to a (somewhat eye-watering) $60,435. It is possible to equip a Gladiator with the EcoDiesel and spend much less money, as it’s available on every trim level for 2021.

In keeping the classic “Jeep face” with the seven-slot Wrangler grille, Jeep engineers were faced with packaging challenges on the EcoDiesel. Even though the Gladiator’s seven slots are wider than those of Wrangler, the EcoDiesel adds an intercooler that requires airflow alongside the radiator. It’s just not possible to shove enough air through those fins and keep the diesel Gladiator cool while going through the grueling steps of the SAE J2807 test that certifies a manufacturer’s tow rating.

Additionally, the extra weight of the EcoDiesel engine and its accessories takes a significant chunk of payload capacity away from the truck, to the tune of about 400 pounds. You won’t bring two other friends and their luggage in the Gladiator EcoDiesel while towing toward the top of the rated weight.

So, if you really want to “tow heavy” with a Gladiator, you’ll need a Pentastar-powered Sport or Sport S truck with the “Max Tow” package. In my case, though, the EcoDiesel was rated for enough weight to pull my enclosed trailer with a friend’s 1983 “E21” BMW 320i in the back. The biggest challenge – which Motor Trend said the Jeep couldn’t handle – was stability of a big box behind the Gladiator.

Towing with the 2021 Jeep Gladiator EcoDiesel

I started out with an empty trailer weighing around 3,000 pounds, then added the BMW and its 2,400 pound curb weight. In both cases, the Gladiator was totally happy pulling the load. We took the Gladiator and trailer on city streets, through curvy construction zones, over bumps and potholes, and out on the DC metro area’s notoriously fast-and-disastrous highways. It was all… totally fine.

The EcoDiesel’s torque was the real star away from a stoplight or accelerating down an on-ramp. The truck doesn’t feel fast once at speed, but getting up to speed is a pleasure as the eight-speed clicks off gears and the turbodiesel does its thing.

Steering, typically a bit loose on-center in “charming” Wrangler fashion, was surprisingly solid with the trailer attached. Braking performance was also good (not great), even when traffic stopped short on the interstate. Aftermarket pads would add a bit more bite as pedal travel progressed. Jeep offers a trailer brake controller, though my truck was not so equipped. I was using a Tekonsha Prodigy RF, which plugs in-line between the truck and trailer and actuates the trailer brakes. It worked well, though Jeep’s built-in controller would be smoother at low speeds and tie in better with the truck’s stability control.

Stability, speaking of, was excellent. I was worried about the Gladiator being too soft to handle my trailer – especially given windy conditions during our test. With weight distribution set up on my hitch, nothing felt overloaded or out of control at any point. A hitch with sway control (separate from weight distribution) would do even better.

My two big complaints about towing an enclosed trailer behind the Gladiator were with the mirrors and the transmission. The Jeep’s mirrors are identical to those of the Wrangler, and they are far too narrow for towing purposes. I suspect aftermarket options could fix this in short order.

While the transmission generally worked unobtrusively, I longed for a “Tow/Haul” mode that would change its programming while towing. Delaying upshifts and calling for downshifts under braking would help with acceleration at low speeds and add assistance while slowing.

I approached towing with the 2021 Jeep Gladiator with apprehension, and walked away with confidence. Is the Gladiator the perfect tow vehicle? Not at all. Any enclosed trailer longer than mine would be too much for the chassis, and an enclosed made of steel would be too heavy once you added a car inside. But it handled mine just fine, and would clearly do well with an open trailer behind it as well.

The Gladiator is a niche truck, first and foremost. It’s Jeepy-enough to be taken off-road and hold its own, the roof can be removed with ease, and even fully-loaded, it’s not exactly the peak of “luxury” inside. It’s rough-and-tumble, with a ton of personality. If you’re looking for those attributes plus enough tow capacity for your weekend track trips, the Gladiator occupies a space of its own in the midsize truck market. No other pickup truck can tow a trailer with the roof removed as music blasts from the sound system mounted on the roll bar – because why not, the doors come off, too.

You’re either a Jeep person or you’re not – which are you?