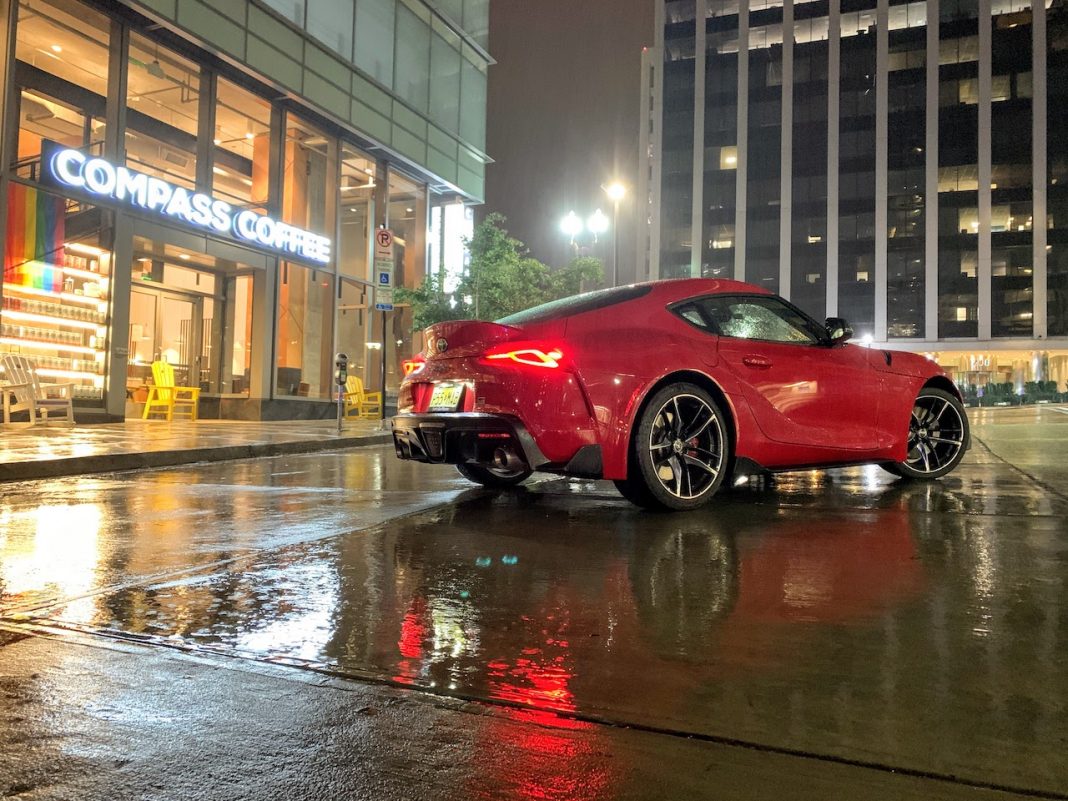 Let’s get one thing out of the way – when Toyota revealed the 2020 Supra last year, I was one of the people ragging on it endlessly. Their flagship car should be developed in-house, I whined. I spent about twenty minutes with a Supra last October, and softened a bit. Though the waiting list for a loan was long, Toyota finally managed to get me behind the wheel of a 2020 Supra for a week. I was also able to slip behind the wheel of a 2020 Supra Launch Edition and fling it around Virginia International Raceway. Before we dive in to the details, to all those thinking like me about the badge and the heritage and who developed what – quitcherbitchin‘ because the Supra is a very impressive car no matter what it’s called.

This is the 2020 Toyota Supra, the brand’s fifth generation of sports coupe to carry the Supra name. Early Supras were a trim level of the Toyota Celica, there were a few that stood on their own, and this fifth-generation Supra is more of a group project. The Supra lineage has always involved an inline six-cylinder engine driving the rear wheels, and for this current Supra, Toyota felt it most important to keep that straight six between the front shock towers. Of course, Toyota has moved to V6 engines and not offered a straight six for quite some time. They deemed production and certification of a Toyota inline-six to be cost-prohibitive, and the new Supra became a joint project with BMW.

The 2020 Supra is still a rear-drive grand tourer powered by an inline six. Toyota designed the body, worked some (minor) magic on interior bits, and tuned the engine and suspension to their liking. Otherwise, though, this Supra is a Toyota in name only. It’s built by Magna Steyr in Austria, alongside the current BMW Z4 roadster, riding on the same “G29” BMW platform.

BMW has been known for relatively-legendary inline six-cylinder drivetrains for decades, and however fussy they might be to own (I’m looking at you, S54), they are generally quite good to drive. The “B58” six found in the Supra is shared with the Z4 and several other BMWs, to include the M340i sedan and X3 crossover. In 2020 Supra guise, the B58 produces 335 horsepower and 365 lb-ft of torque. It’s paired to the now-standard-everywhere ZF eight-speed automatic transmission and an electronically-controlled limited-slip differential.

Supra’s curb weight comes in around 3,900 pounds and Toyota claims the car will sprint to 60 mph in about 4.1 seconds. The only option on the Premium trim I drove is a suite of driver assistance technology for about $1,200. My car was so equipped and carried a MSRP of $56,220.

The weather was decidedly not on my side the day I took delivery of the Supra. Rain was absolutely pouring and the forecast was grim for a day or two. I started my Supra experience with everything in the most “normal” mode possible – shocks loosened up, exhaust quiet, transmission shifting itself. Once I folded myself into the driver’s seat (practice yoga if you are tall), I felt right at home. The long, bulging hood went on seemingly forever in my gaze. I sat low and back, wondering if the seat was bolted directly above the rear axle. I hit the Start button and was greeted by BMW’s blungggg! chime, fiddled with the shifter, slipped the Supra in to Drive, and went for a calm little cruise.

As it turned out, the Supra did a good job at pretending to be a normal car. While not the biggest offering in the sports coupe segment, it’s comfortable enough and sized for tall-ish people (above 6’2″ and you may have a tough time). The BMW-sourced climate control and iDrive were easy enough to figure out, though iDrive is showing its age compared to other infotainment systems. I appreciated the heads-up display and the variety of information it could share. The JBL-branded sound system is fine but not a standout. Left to its own devices, the ZF8 automatic tries to keep the engine low in the revs, relying on turbo torque to scoot you around while saving fuel. In “normal” mode, the suspension was oddly rough over expansion joints and other small bumps, though generally comfortable.

But saving fuel is more apt for a Prius. The weather cleared throughout the week, and I could finally put the Supra in Sport mode and enjoy it as the driver-oriented machine it’s meant to be. With the suspension and steering firmed up, the transmission clicked over to Manual, and the exhaust set to the delightfully-childish snap-crackle-pop setting, every drive in the Supra was the best kind of dramatic. The car takes on a more classic-BMW character here. You’re in charge of gear changes and can let the lovely BMW straight six wind out toward redline before upshifting, howling through that silly exhaust in a way that only an inline six can. The 335 horsepower shoves the car away from a red light or down an on-ramp with authority, far quicker than you’d expect.

In both “normal” and Sport modes, the 2020 Supra reminded me of the “old BMW” cars I’ve driven, owned, and adored. It’s very reminiscent of the 1999 BMW Z3 I used to learn manual, and as with any older BMW, the Supra feels like a vehicle developed for driving first, with luxuries and creature comforts added later. I yearned for better seats, as the bottom cushions don’t adjust enough to support taller drivers. The car is nice enough to justify the sticker price, but the majority of what you’re buying is a very good drivetrain and chassis. Everything else is just a bonus.

Track Time in the 2020 Toyota Supra

My loan didn’t coincide with any realistic track events, but I lucked into driving another Supra on track anyway. My buddy Trevor purchased a 2020 Supra Launch Edition, which is identical to any other ’20 Supra aside from visual differences, and offered me the key at our trip to Virginia International Raceway in July.

Trevor’s Supra Launch Edition has not been modified, though he changed the factory brake fluid for Motul RBF 600, a track-oriented brake fluid with a high boiling temperature that can handle repeated high-speed stops. I set everything in his Supra to maximum-attack mode, pulled my helmet on (with plenty of room, thanks to the “gurney bubbles” in the roof design), and set off for a 25-minute session around VIR.

I built speed as I built confidence in the car. The Supra never lets you forget its 97-inch wheelbase, and requires a careful right foot applying throttle out of tighter corners to keep the rear tires in line. Power from the delightful B58 six builds steadily and the car pulls strongly, all the way to redline. While many two-pedal transmissions are often fastest around the racetrack left in whatever “automatic” mode (Porsche’s PDK comes to mind), I elected to shift the ZF8 on my own. The transmission is a predictable dance partner, only doing what the driver asks of it and nothing else.

As my confidence grew, I focused on getting good runs out of Oak Tree and Hog Pen, ensuring maximum speed on VIR’s long straights. The Supra treated these straight ribbons of asphalt like it would the Autobahn – drama free, clicking off shifts as I requested, building speed rapidly. 140 miles per hour into braking zones was easily achieved, and the big brakes (four-piston Brembos up front) did a good job hauling the car down to turn-in speeds with no fade from the factory pads and a solid pedal thanks to that Motul brake fluid.

The Supra’s only real flaw on track mirrored that of many other street cars – a lack of aero to keep the chassis pushed down through some turns at speed. Popping the outside tires over curbing in the Climbing Esses, as I do in my racecar with its big trunk-mounted wing and front splitter, was not an option in the Supra. Even with the throttle firmly planted into the firewall, the chassis was too unsettled for me to build any confidence in such a maneuver. So, I settled for the safer and slightly-slower approach that involved 100% asphalt and nothing more.

Toyota has, of course, revealed the 2021 Supra, which is available as of this writing. The BMW-sourced B58 engine now makes another 47 horsepower, for a total of 382, finally aligning with its Z4 cousin. Suspension tuning is revised, and the exhaust is less look-at-me! shouty in Sport mode.

Some 2020 Supra owners are upset about the 47 horsepower increase. It’s not “just” a revised engine tune, Toyota claims the exhaust manifolds and pistons are changed to help produce that power bump. Regardless, I found the 2020 Supra and it’s “only” 335 horsepower to be more than adequate. I’m eager to get behind the wheel of a 2021 and see if I feel differently. Toyota now offers a 2.0 liter turbocharged four-cylinder, also BMW-sourced, as an entry-level option, but let’s be real here. BMW is known for its sixes. Get the six.

I went into this week with some brief “yay it’s another BMW” driving impressions and a lot of pent-up thoughts about Toyota trying to call this car a Supra. I ended the week rather sad to see this Renaissance Red machine go. While I can still go down a rabbit hole of pedantry about the branding and how the B58 might not deliver 2JZ-levels of reliability, the 2020 Supra deserves more than that. It’s a head-turning design paired to a very, very good everything else. No tea, no shade, the Supra feels like an old BMW brought into the present, and that’s a good thing. It is, for all intents and purposes, a modern Z4 coupe, which we haven’t seen for twelve years.

Yes, the Toyota badge on the hood has a BMW part number. In the words of Whitney Houston, it’s not right, but it’s okay.

2021 Toyota RAV4 Prime Review: Get Your Feet Wet in the EV Kiddie Pool